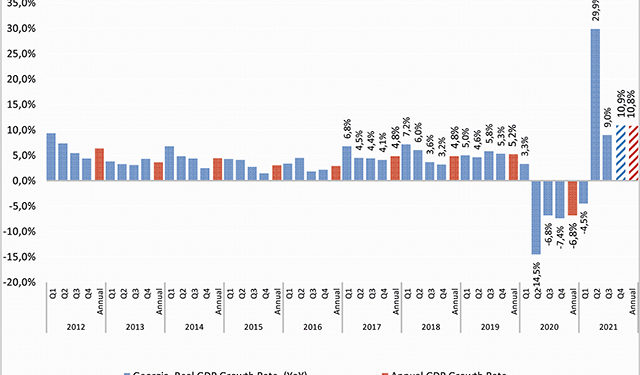 ISET-PI has updated its real GDP growth forecast for the fourth quarter of 2021 and the first quarter of 2022. Here are the highlights of this month’s release:

HIGHLIGHTS
• According to Geostat’s updated estimate, Q3 2021 growth rate stands at 9%. As a result, the real GDP growth estimate for the first nine months of 2021 is 11.3%.
• Geostat has also revised estimates for real GDP growth for 2020, and now it stands at -6.8%, which is slightly lower than the previous estimate of -6.2%.
• As a result of the update, ISET-PI growth forecast for Q4 of 2021 was changed to 10.9%. ISET-PI’s first forecast for Q1 of 2022 puts GDP growth at 7.8%.
• Based on September’s data, we expect annual growth in 2021 to be 10.8%. Historically, our model’s forecast based on September data is rather accurate, but this year the number is most likely slightly overestimated. This is because the nature of the shock (a transitory lockdown event and difficult epidemiological situation) in the last three quarters of 2020 and correspondingly abnormally high GDP growth (base effect, increased external demand and higher commodity prices) in the second quarter of 2021, had not had relevant analogues in the Georgian data.
• In addition, the National Bank of Georgia revised its expectation for the real GDP growth up from 8.5% to 10% in 2020 (very close to our current annual forecast). According to the Monetary Policy Report, among the reasons behind the upward revision is the stronger-than-expected impact of pent-up demand. The main driving forces of this growth are final consumption and net exports (due to a significant increase in exports of goods, which has been accompanied by a partial recovery of the tourism sector). The real GDP growth forecast for 2022 is around 5%.

During this period, the import of goods increased by 23.4%, driven by an increased import of cars with more than 10 passengers and carbon steel rods from Turkey; import of petroleum and petroleum products from Turkmenistan, Russia and Azerbaijan; import of carbon steel semi-finished products and medicines from Ukraine. Among other affected imports were: petroleum and petroleum from Bulgaria and Italy; dishwashers and various cranes from Germany; mixed goods from France; copper ores and concentrates from Indonesia; computing machines and their blocks from Hong Kong; polymers and ceramic tiles from Iran; and motor cars from Japan. In contrast, Georgian imports of copper ores and concentrates from Armenia and Brazil; and motor cars from USA declined notably. Consequently, the trade deficit widened dramatically by 31.8% yearly, and amounted to 552.2 million USD. Overall, trade related variables still had a small positive contribution to the GDP growth forecast.

Tourism Sector Remains One of the Main Challenges

Tourism arrivals and receipts only partially recovered in September of 2021 after a sharp decline in 2020. In September, the number of international visitors increased by 348.8% yearly (decreasing by 71.1% compared to the same month in 2019), while the increase in tourist numbers (visitors who spent 24 hours or more in Georgia) amounted to 401.3% (decreasing by 61.1% compared to the same month in 2019). It is notable that annual increase in the number of international visitors was mostly driven by Russia (56.9 ppts), Ukraine (43.3 ppts), Turkey (27.2 ppts), Belarus (21.6 ppts), Kazakhstan (20.6 ppts), Saudi Arabia (18.5 ppts), Armenia (16.6 ppts), Israel (15.5 ppts) and Poland (13.8 ppts). Overall, the recovered numbers of visitors and tourists, along with a moderate increase in touristic spending has made a small positive contribution to the growth forecast.

Notably, the GEL/USD, GEL/EUR, GEL/TRY, and GEL/RUB real exchange rate appreciated compared to the same month of the previous year by 8.5%, 10.7%, 8.2% and 2.4% respectively. Appreciation of the REER is typically associated with domestic export goods losing competitiveness on the foreign markets, but it also translates into less pressure on the prices of imported goods. Overall, REER-related variables had a small positive contribution to the real GDP growth projections.

Excessive Inflation and Strict Monetary Policy Still Hinders Economic Growth
In September, the annual inflation of consumer prices amounted to 12.3%, which is notably higher than the targeted 3%. Approximately 4.5 percentage points of CPI inflation were related to higher food prices, which increased 16.5% annually (this was driven by the hike in food prices worldwide – FAO Food Price Index increased by 31.9% yearly). Furthermore, increased oil prices made a notable positive contribution (1.9 ppts) to the annual inflation measure. The latter trend is mostly a reflection of significantly increased oil prices on the global market (Euro Brent Spot Price (COP) increased by 82.1% yearly). The other important contributors were increased prices on healthcare (0.7 ppts), tobacco (0.2 ppts) and utilities (1.7 ppts). Meanwhile, the measure of core inflation amounted to 6.3%. Due to higher annual inflation rate compared to the targeted 3% and risks of emerging inflationary expectations, National Bank of Georgia (NBG) maintained Monetary Policy Rate (MPR) unchanged at 10% in September and October 2021. Overall, CPI related variables had a slight negative contribution to the GDP forecast.