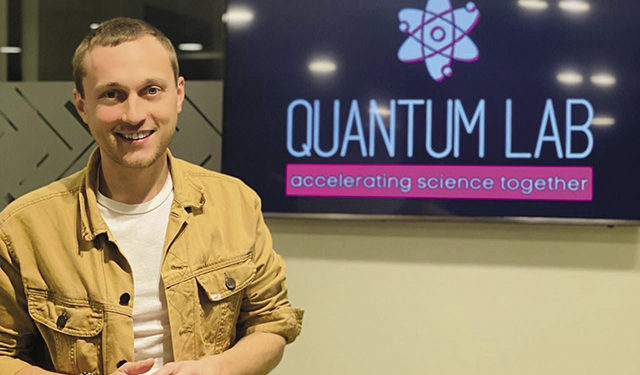 Nowadays, in the era of modern technologies, accelerating science together, through the joint forces of various sector representatives, is especially important. To achieve this goal, motivating young researchers by financing their scientific projects is one of the key components. And this is one of the main principles of D-tech, a distinguished company aimed at developing digital technologies and science. As such, the company is currently implementing a project to support young researchers and help them gain finances to implement their innovative and useful ideas.

On this and other important issues, such as the main obstacle in the development of the IT industry worldwide and in Georgia, the company’s activities, implemented projects, contribution to the scientific development in the country and future plans, GEORGIA TODAY spoke to the representative of D-Tech Stanislav Sabanov, Project Manager of ioli.digital and Relocater CEO.

Tell us about D-tech and its activities.
D-Tech LLC was established in June 2019. The founders of the company are Liana Berberashvili, a citizen of Georgia, who lived in Russia for a long time, and was engaged in the creation of digital content, mainly graphical visuals for desktop and mobile applications, and Dmitry Samsonov, an Israeli citizen of Russian origin.

The prerequisite for the creation of the company and the decision to move to Georgia, among other things, was the IT Virtual Zone program, which was actively promoted by the government at that time. It was decided to create a company to participate in contract software development, first of all components for larger development for larger companies, in the field of home automation, billing, and accounting systems.

The creation of the company, the adjustment of the work of the accounting department, and the legal department, we completely entrusted to Wingforce. Their professionalism and excellent knowledge of law enforcement practice in fact completely saved us from the hassle associated with accounting and the need to have our own legal department, significantly saving us money at the initial stage. Also, the favorable business environment in Georgia allowed the company to develop relatively quickly, get on its feet and think about more ambitious projects.

Accelerating science together is the main motto and principle of D-tech. Tell us more about it.
The company’s management is sincerely confident that the world is on the verge of incredible changes. A new industrial revolution is coming, the scale of which cannot be overestimated or imagined. Something similar was observed by humanity in the late 19th, early 20th centuries, the industrial revolution, which created the world as we know it now. With high-rise construction, cars, factories, etc.

The human ability to industrially produce improved tools led to the emergence of computers, including personal, mobile phones and digital communications. The development of IT technologies, in turn, gave further impetus to the field of industrialization. The efficiency of human labor over the past few decades, despite all the social and political difficulties, has grown many times over. To evaluate this progress, it is enough to imagine how many years and how many people would have to work, doing all sorts of things to make a modern mobile phone. And today – almost any inhabitant of the planet can make money on it, and at the same time not deny himself other needs.

The joint development of production and IT, when IT allows you to manage more and more complex technological and production processes, and the industry allows you to make more and more advanced computing systems, has led to an exponential, explosive growth in human capabilities for managing and processing information, which in turn, judging all over, will lead to a new technological revolution – the emergence of Artificial Intelligence.

Whether it will be general intelligence, capable of thinking like a person or even clearer, or will it be a set of systems that allows you to manage complex processes that a person needs is a debatable question, but as businessmen, the company’s management understands that these are opportunities for natural growth, along with the industry.

The main obstacle in the development of the IT industry all over the world, in general, and in Georgia in particular, is staff shortage. The large economies of the EU and the US offer IT professionals extremely lucrative and ever-increasing salaries, attractive working conditions, and social security. Most of the successful professionals work for Western companies, moving with their families. In small economies, this leads to the fact that young specialists are forced from the very beginning of their careers to look closely at foreign companies and universities, but this is not available to everyone. The language barrier and limited financial opportunities leave behind a rather large share of modern youth in small economies such as Georgia.

It was these considerations in the spring of 2021, coupled with the funds that were earned thanks to the government’s well-thought-out policy in the development of the IT sector, that led to the idea of establishing cooperation with higher educational institutions, young scientists working in the field of information technology and related fields.

By supporting non-company-related research in industries such as machine learning and quantum computing, you can not only find promising contract software development employees, but also start creating cutting-edge products by working directly with scientists.

What about grants and funding of new ideas from young scientists? How they can contact you and participate in the grant competition? Who can participate?
Yes, this is exactly what we are looking for. I must say that the first projects that we supported surprised us incredibly. It became quite obvious that the scientific and technical environment of Georgia is not at all lagging behind world trends. It was incredibly exciting, and I must admit, completely unexpected. Of course, there are not many people working seriously in companies, but the projects they are engaged allow us to conclude that the scientific school is alive and developing.

To receive support, researchers need to meet several criteria:
Conduct research in quantum computing or machine learning. To take part in the competition, it is enough to fill out a form on the ioli.digital website. Further, the application received by us is evaluated using the internal expertise of the company, or we involve an expert from the relevant scientific field.

D-tech has just started funding its first research project and is ready to provide another 9 grants by the end of 2021. Tell us more about this process.
In August, we launched the ioli.digital project, the task of which, in an experimental mode, was to search for scientists in the areas of interest to us. Almost immediately, we received 2 responses to grant funding and decided not to stop at the achieved result. D-tech determined the size of the fund, which is calculated to the amount of 10 applications by the end of 2021 and will be distributed among the winners of the Grants competition. Again, it should be noted that we are experimenting and in the process it will become clear how much our research support program will develop in 2022.

What is the main principle of grant distribution? Which direction should the participants focus on?
We are interested in research projects related to two scientific fields: quantum computing and mechanical engineering. If a candidate for a grant meets these main criteria and the results of his research, according to our initial assessment, can be applied in our projects or new projects may be born on the basis of this, then we are ready to invest time and provide opportunities to accelerate the achievement of research results.

Why it is important to motivate young researchers by funding their research projects?
Somewhere now in Georgia, a potential founder of the new Google is completing his 2nd or 3rd year, and if this person cannot apply their talents in Georgia, then it will be not only their personal drama, but an incredible loss for the country, which was missed due to geopolitical conditions. Apparently now, in our time, patriotism, in the very original sense of the word, consists of supporting science in our country. Simply because if you do it right, and if a little luck comes along, the whole country will become much more prosperous.

For comparison, Google’s revenue is $182B dollars, and Georgia’s GDP is $15B dollars. Even a much smaller increase in the country’s GDP would be significant, noticeable and desirable. We have one case where a researcher who found himself in a difficult financial situation decided to give up research and was forced to look for a non-core job for him to help his family. We had to solve this issue by joint efforts so that researcher remains in science.

D-tech has just signed a Memorandum of Understanding with the University of Georgia. What is the main goal of cooperation?
Universities around the world are a treasure box of human capital and knowledge. The primary task of educational institutions is to prepare their students for integration into the world or regional economic system. The task of the business is staffing, in order to achieve the results of existing projects or develop new ones. There are many examples in the world where business and education go hand in hand, creating university departments, courses and even faculties. We decided to use this model and are grateful to the University of Georgia for their interest and response. But everything has its time. In the near future, we will separately announce a scientific project.

We can already say that within the framework of cooperation on November 7, we are launching the “Scientific Lecture Hall” project for children aged 14 to 17 years. The event will be held in collaboration with the University of Georgia, IT company D-tech, Teenage Intellectual Club Tbilisi and the Terminal network of coworking spaces, on the basis of which we will hold the first lecture and, of course, in compliance with all the rules and recommendations established by the Ministry of Health of Georgia.

What plans does D-tech have for the future?
The company continues to develop contract software, but we are also developing several innovative AI products that we hope to release to the public soon. First of all, they will be focused on Western markets, but over time we hope to make versions for the Georgian market as well.

However, even here it will not be possible to do so without the support of the scientific community. We already understand that in order to adapt some projects, we will need to collect the largest and most complete electronic library of Georgian texts. Currently, the largest text in Georgian that is available electronically is Wikipedia, and its Georgian part is only 172.4 MB in compressed form. For comparison – English Wikipedia is 18.7Gb – more than a hundred times greater. And modern machine learning methods are designed so that the more text there is in a language, the better they will be fluent in that program language.