In Georgia, It is More than just Political Infighting 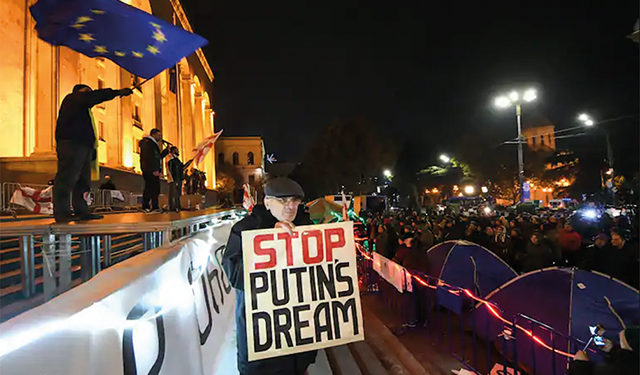 Georgia has been facing internal political disturbances following the arrest of the leader of Georgia’s major opposition party, United National Movement (UNM). Narratively, as well as purely propaganda-wise, the opposition managed to gain the upper hand as the scenes of the party HQ being stormed damaged the ruling party, Georgian Dream’s, international standing. However, it remains to be seen whether this crisis could reinvigorate support for the party among other population groups than just the hardcore opposition supporters. From a longer term perspective, it could be argued that the opposition managed again to put itself once again into the political spotlight, specifically in the light of UNM’s declining political ratings over past years.

Georgia is in the midst of this democracy-building crisis precisely because of the post-2020 parliamentary elections, where the opposition refused to acknowledge the results. But the roots of the internal troubles could be more far reaching. Ultimately, it could be about how disconnected the political elites of Georgia have become with the demands of the ordinary people. This happens from time to time in a state. Results could be ugly, but the ability to see this general disenchantment could heal the troubles.

The political class is polarized, and what is more important, both sides of the aisle are seeing decline in trust from the general public. Take the opposition, which faces antipathy from wider sections of the public: decades pass, but the rhetoric remains the same. A gradually decreasing number of supporters is also being seen for the governing party, as long-term economic problems are exacerbated by the pandemic, constituting a major challenge. Overall though, little has been offered over the past years from either side, and, for many, the current crisis is more about a GD-UNM struggle than a fight for democracy and economic development.

This explains the large abstention rate of voters during the past several elections in Georgia. Large sections of the population do not see a preferred party with a fitting program amidst the growingly polarized political climate, which delays the prospects for a more balanced foreign policy and internal economic development. The latter is exactly what is needed. What Georgia has lacked throughout its post-Soviet independence period is a long-term policy plan to re-boot its fragile economy, heritage of the troubled 1990s. More attention from inter-party politics towards the needs of the economically poor population is much needed.

Democracy is struggling, and it is not only about whether the arrest of the opposition leader was a lawful act or even an urgently necessary move in these circumstances. We are dealing here with what the Georgian public has been accustomed to since regaining independence: the belief that a ruling party always stands above the law.

But the crisis has a wider dimension. The South Caucasus is home to two small and fragile democracies, Armenia and Georgia, the former having taken a major hit last year when its dependence on Moscow grew exponentially following Yerevan’s defeat in the Second Karabakh War. Now, Russia is even more capable of backtracking the reformist agenda of the Armenian leadership, as protests are being staged against the ruling party. While internally the ruling PM is increasingly challenged, Russia is playing the long game by navigating and slowly killing the last vestiges of Armenia’s independent foreign policy, and increasing Yerevan’s dependence on Moscow.

Georgia too is being hit. Internal challenges have been troubling the ruling party for more than a year now. And this is what constitutes Russia’s power: the inability of political classes in both Georgia and Armenia to find unified long-term visions for their respective states. These divisions diminish Tbilisi and Yerevan’s pursuit of geopolitical standing.

And it also not about Georgia. Eventually, the political infighting could be a boon even to some in the West who have always been skeptical about Tbilisi’s EU/NATO ambitions. With prolonged internal problems inside further delaying the closer integration of Georgia into the Western institutions.