How Do Russia’s Shortcomings in Ukraine Affect the South Caucasus? 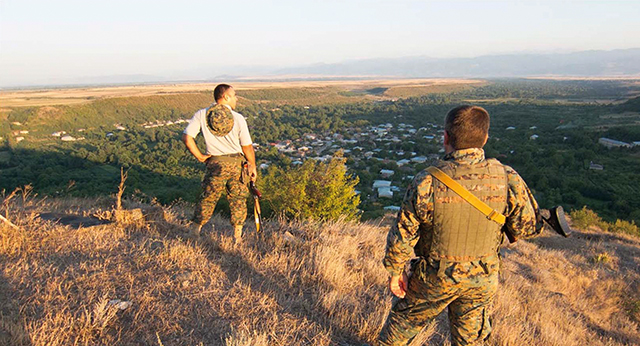 Walking down the bustling streets on a cool Tbilisi morning, one can hardly ignore the abundance of Ukrainian flags and posters. Hanging from balconies, door fronts, and in shop displays, the citizens of Georgia have not been shy of their support for their Black Sea brethren. As Russian forces are required to retract from several failed assaults, recentering on more “important” targets, Ukraine has managed to buy itself some breathing room.

While the war is far from its closing point, the effects of the Kremlin’s decisions have already begun to ripple through the South Caucasus. With the region already significantly affected by the Russian presence, Armenia, Azerbaijan, and Georgia are all watching intently. Each nation, with their own separate yet interwoven relationship with the northern neighbor, will likely be reassessing their positioning in the region.

Of notable concern is the reviving tensions in the Nagorno-Karabakh territories. After the 2020 war between Armenia and Azerbaijan and a Russian-brokered ceasefire, a force of approximately 2000 Russian peacekeepers were deployed. Tasked with maintaining the ceasefire and the protection of civilians, several violations of that ceasefire and other small attacks against the population have occurred under their watch.

The peacekeeping force is led by Major General Mikhail Kosobokov, formerly the commander of the 7th Military Base in occupied Abkhazia. These forces have been stationed under his command primarily along the Lachin corridor, the main transportation route into Nagorno-Karabakh. This corridor has been the site of multiple attacks on both Armenian and Azerbaijani military and civilians, resulting in casualties for both sides.

Azerbaijan, likely sensing weakness on the part of the Russian military, has begun to make moves in the mountains of Nagorno-Karabakh. Sources on the ground reported advancing forces against Armenian defenders near the village of Farukh. The defenders fell back to a nearby friendly village, alerting the Russian peacekeeping authorities of the violation. In a video posted on social media, Russian military negotiators failed to reach any agreement with the Azerbaijani command staff.

Following this, Russian peacekeeping forces were seen on several open source videos mobilizing in the area. In a series of photos released by the Armenian side, Russian armored vehicles and trucks had moved into positions to deter any further Azerbaijani incursion. The commander of the peacekeepers released a statement saying they would be investigating the incident.

With continuing material and training support from Turkey, Azerbaijan has long been emboldened to increase its territorial gains. Baku, seeing the region as a way to rapidly develop its energy exports, has stated its intentions. Last year, Azerbaijani President’s Special Representative to Shusha Aydin Karimov said that the government had already allocated $1.5 billion for “reconstruction of the liberated territories.”

In addition to education and health focused programs, they have openly said that a “green energy zone” is planned for Nagorno-Karabakh. By removing this additional weight on Azerbaijan’s gas production, it is likely they will aim to fill the gap in Europe created as Russia is slowly removed as the primary supplier. The combined military and economic leverage in the region could clear the way for increased aggression against Armenia and further expansion.

On top of this looming threat, Armenia stands to lose more Russian support. The Kremlin has been slow to lend material support to the nation, leaving Armenia with underdeveloped defense equipment and technology. As Russia focuses the vast majority of its efforts to support and supply the offensive against Ukraine, Armenia is even more unlikely to receive anything in the event of a renewed conflict.

Meanwhile, Georgia has attempted to play a neutral role as these waves around them continue. While Tbilisi has joined in the international sanctions after much popular pressure, it is only private organizations that have gone above this call for support. Several private companies have refused to ship products to Russia and an estimated 2000 volunteers have left to assist in the conflict, most notable of which is the Georgian National Legion.

However, it is unlikely that Georgia can maintain its desired neutrality in the situation. The de facto leadership in the occupied territory of Tskhinvali (South Ossetia) has indicated its desire to become a part of Russia. Some of the higher echelons of their government have opposed this, saying that Russia has already recognized their independence, something that they say was the original goal; nothing more. This rift has highlighted the potential fracturing inside the breakaway region’s leadership structure.

Additionally, a significant portion of South Ossetian forces sent to fight alongside Russia in Ukraine have returned after allegedly having a very hostile interaction with their Russian commanders. According to sources close to the matter, South Ossetian forces were ordered on the offensive against heavily defended Ukrainian positions. The Ossetian troops decided to advance according to their doctrine and against the wishes of their Russian commander.

As a result, the commander refused to resupply and allow the soldiers to retrieve their fallen comrades. After coming to a head with threats of violence exchanged, many of the South Ossetians opted to leave for home. While the government publicly called for its people not to criticize the returning men, it is doubtful they will look on this souring of relations well. At the same time, the other rogue territory of Abkhazia has stated that they will not seek inclusion into the Russian Federation and also intend to remain separated from Tbilisi.

The developing situation in the South Caucasus may very well become a proverbial fork in the road for many of the players. Azerbaijan and Armenia still display the propensity for engaging in a re-ignition of war. Baku still calls for the “liberation” of further land in Nagorno-Karabakh and Yerevan digs in deeper, making the region a proverbial powder keg.

Georgia, with the decision before it, will likely face a split in popular opinion on how to move forward. Many will want a move towards the West, and further distance the country from Russian influences in the region. Some will also see Western decadence and meddling in Ukraine as unjust and irresponsible, as well as a cause for Russian intervention. The ripples of the war in Ukraine have reached the South Caucasus, and it will likely mean significant changes for all nations involved.