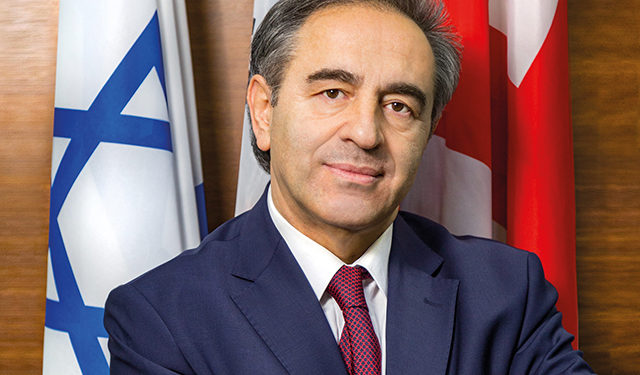 On January 27, International Holocaust Remembrance Day, several events were held under the auspices of the Israeli House, led by Itsik Moshe.
The first event was held in the office of the Israeli House in Tbilisi. The events were opened by Member of the Knesset, Chairman of the Committee, for Immigration, Absorption and Diaspora Affairs, David Bitan via live broadcast from Israel. The commemoration event was attended by academic staff and students from four Georgian universities, where the history of the Holocaust is taught on the initiative of Israeli House; by members of the Jewish community; human rights activists; Mako Ghavtadze, Member of the Board of the Tolerance and Diversity Institute (TDI); GM of the International Christian Embassy from Jerusalem, Giorgi Jijiashvili; and Bishop of Tbilisi and the Senior Minister of the Baptist Peace Cathedral, Malkhaz Songhulashvili. Also attending the event were representatives from four universities: the University of Georgia, Grigol Robkidze University, Georgian American University and the European University.
Itsik Moshe addressed the audience, noting that the 6 million Jews who are victims of the Holocaust are not just statistics: for every Jew each of the 6 million is a testament, a memory, and a thought for the future.
“In just the few decades since the restoration of the State of Israel, we have built a leading country in the world. We look to those who helped us during the years of exile and the great catastrophe, the Holocaust. We also encourage them towards friendship and mutual cooperation,” he said.
He spoke about the “Georgian Righteous Among the Nations,” Sergey Metreveli, who was recognized by the Yad Vashem – the World Holocaust Remembrance Center in Israel.
“One of the main activities of the Israeli House is to provide more knowledge to the new generation. For this purpose, with our support, the history of the Holocaust is taught in four universities of Georgia, we have opened cabinets of Israel, and competitions for student works are held. We take the winning students to see the Holocaust Museum in Israel,” Moshe said.
The Israeli House, with the support of the Knesset and Yad Vashem, made a documentary about Georgian Schindler Sergey Metreveli.
In 2020, the Israeli House, in collaboration with Oni City Hall and the European Association for the Preservation and Promotion of Jewish Cultural Heritage (AEPJ) opened a monument dedicated to the memory of the Holocaust and Sergey Metreveli in Oni.
Davit Chikvaidze, Acting Mayor of the municipality of Oni, who wore the yellow Star of David as a sign of solidarity with the Jewish people, addressed the audience regarding this occasion. He expressed readiness for Oni to host an event in memory of the Holocaust in the future.
The evening of remembrance continued at one of the leading universities in Georgia, the Sokhumi State University, which is currently located in Tbilisi. The Israeli House is planning to arrange an Israel conference hall there, which will be permanent. The university will also begin to teach Holocaust History. Former Vice Speaker of the Knesset, Hilik Bar from Israel, participated in the event via online broadcast from Israel.
He addressed the Israeli House University Rector, Prof. Zurab Khonelidze, and thanked him for such an event.
Former Member of Parliament of Georgia, Gia Mikeladze, joined the event via Zoom, expressing solidarity with the Jewish people.
At both events, young Georgian singer Kristi Japaridze performed the Israeli national anthem, ‘Golden Jerusalem’ and ‘Eli Eli’ in Hebrew.
On the same day, Itsik Moshe took part in an event organized by the Public Defender of Georgia, dedicated to the memory of the victims of the Holocaust.
The event, organized by the Israeli House, ended with the lighting of candles.
The leadership of the Israeli House gathered at Tbilisi Synagogue in the evening and spoke about the Holocaust and Jewish identity.
The Israeli House was established in Georgia in 2013 by Itsik Moshe, the former head of the Jewish Agency and the first representative in the Soviet Union. Through public diplomacy, the organization works to establish real bilateral ties between Georgia, Israel, world Jewry and friendly states, working closely with the members of the Israeli Knesset, the international Zionist Organizations, the European Association for the Preservation and Promotion of Jewish Cultural Heritage (AEPJ), the Council of Europe, and the European Alliance for Israel (EAI), which unites up to 100 European MPs.