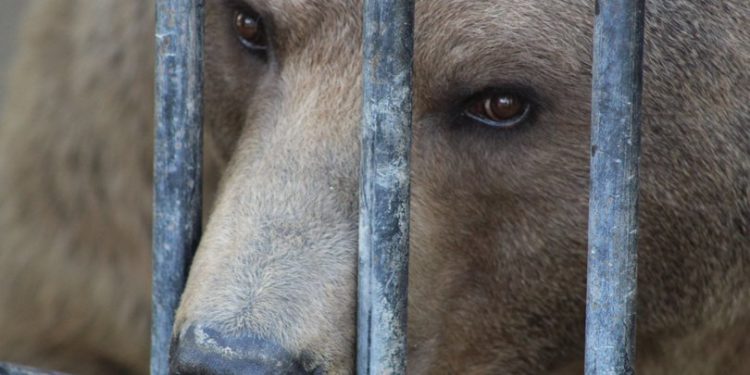 The story of Gori’s lonely bear ended happily – the bear kept at the Gori Mini-Zoo, which had for a long time been living in inappropriate conditions there, got to leave the cage that had become his prison when he was finally relocated to Tbilisi.

The mini-zoo, located in Gori’s Culture and Recreation Park ‘Akhalbagi’, will be abolished on the decision of City Hall, Qartli.ge reports.

The media outlet says the reason for the decision is “observance of safety norms”, although citizens have been protesting the inappropriate conditions in the mini-zoo for several years now. Particular criticism was expressed about the living conditions of one of the inhabitants in particular, a bear who had to live in a small cage. After the abolishment of the facility, it was decided to take the bear to the Tbilisi Zoo.

Mzia Sharashenidze, the head of the public relations department of the Tbilisi Zoo, confirmed to On.ge that the bear had already been taken to their facility.

“We have already moved the bears and foxes to a new zoo, where large cages have been built for them. The bear from Gori Zoo will live with other bears, where there is a large space and a good environment.

“Until the bear has overcome the stress of transportation and he adapts to his new environment, he will live separately and then will join the other bears,” Sharashenidze notes.

In recent years, a number of petitions have been filed demanding the release of Gori Zoo residents. One of the authors of the call was Soso Jikurashvili, the head of the Tskhvarichamia Bear Shelter, who was ready to host a bear from Gori. At his initiative, citizens also contacted the hotline of the Ministry of Environment to demand that the bear be transported to a place with appropriate conditions.

Following the closure of the zoo, the rehabilitation works of the Gori Culture and Recreation Central Park will start in the coming months with the funding of the World Bank.