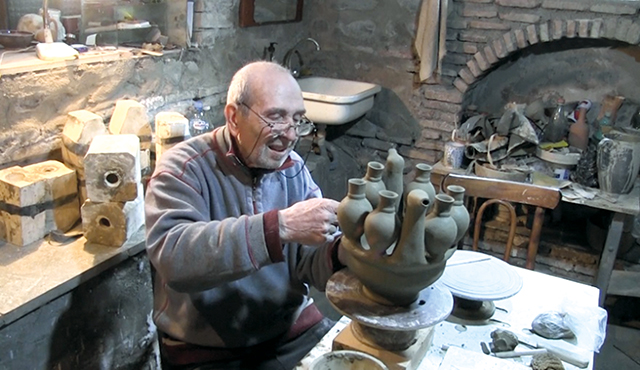 For two weeks from March 22, the Georgian side is using the unesco-centerbg.org platform to present three elements that make up part of Georgian cultural heritage: the interconnected clay wine vessel (‘Marani), the khachapuri tradition, and Georgian dance “Kartuli.”

GEORGIA TODAY contacted representative of the first element Givi Tatulashvili, to ask him about his background and his craft. First, though, we’ll introduce you to the Marani.

“Georgia is famous for its wine making traditions, which also include the diversity of wine vessels of peculiar types,” the site of the Bulgarian heritage center explains. “Amongst these is the Marani, a clay wine-drinking vessel with a circular duplex structure. The lower section is generally an openwork pot serving as a base for the upper section. The upper section consists of many small open-top bulbous vessels resting on and interconnected by means of a hollow tube which rests on the rim of the base. The main figure of the upper section is a zoomorphic sculptural ram or stag head, from whose open mouth one drinks the wine.”

Marani were traditionally used, as bowls and horns are today, at the communal supra (feast) table, as a shared drinking vessel. Making a Marani is no easy task, and requires skills typically passed down from generation to generation. In fact, the tradition is today endangered, as there are only a few masters, among them Givi Tatulashvili, who still make them. To make matters worse, there is no government support at the policy level. However, the local government in Gori, in a show of support for the art, funded Givi in arranging a special museum (the Tatulashvili Ceramic Studio-Museum, 10 Ninioshvili Street, Gori) alongside the Tatulashvili family workshop, which is the main center of Marani-making today.
The Georgian Heritage Crafts Association, as an umbrella organization uniting more than 300 craft-makers in Georgia, also strongly supports, by promoting, through festivals, masterclasses and exhibitions, these crafts skills, and offering grant schemes to both experienced and young masters involved in Marani-making.

Givi Tatulashvili is the only potter living in Gori who continues a third-generation family tradition with his work. But we found out he hasn’t always worked with clay.

“I’m a Construction Engineer by profession,” Givi tells us. “I worked for a large organization for years, but my father and grandfather were potters. My father, after returning from World War Two, decided to continue his father’s craft, and my older brother worked as a ceramicist from day 1, graduating the Faculty of Ceramics at the Academy of Fine Arts in Tbilisi. When I got home from my job every day, I’d watch how my father and grandfather worked, and sometimes help them.”

When did you first get interested in pottery?
I’ve been interested in pottery since I was a child, but I couldn’t pursue it since I chose another profession and because I wasn’t able to study it from the beginning. Nikita Khrushchev [Editor: he led the Soviet Union as the First Secretary of the Communist Party of the Soviet Union from 1953 to 1964], who saw working at home as a reminder of capitalism, forbade having a workshop at home.

To get around the restrictions, my father started selling his pieces in stores, so that allowed him to have his own workshop. I would sometimes join him in his workshop and help out.

Then came a difficult situation in the country, I lost my job: construction workers weren’t needed anymore, so I took on a job teaching construction in a vocational school, while also doing some pottery at home. Then my teaching position got canceled and I decided to go full-time as a ceramicist.

Tell us about your workshop.
The workshop has been here for well over 100 years. The first (brick) kiln was built in the 19th century. I won a competition which got me financing to repair the workshop. The government program ‘Produce in Georgia’ bought me a new kiln, and with the support of Gori City Hall, I opened a historical museum to display the works of my father, brother, and grandfather.

I have students, both young and old, and they help me. I teach at a school on the occupation line. I was supposed to be there today, in fact, but I had my COVID vaccination and couldn’t make it. 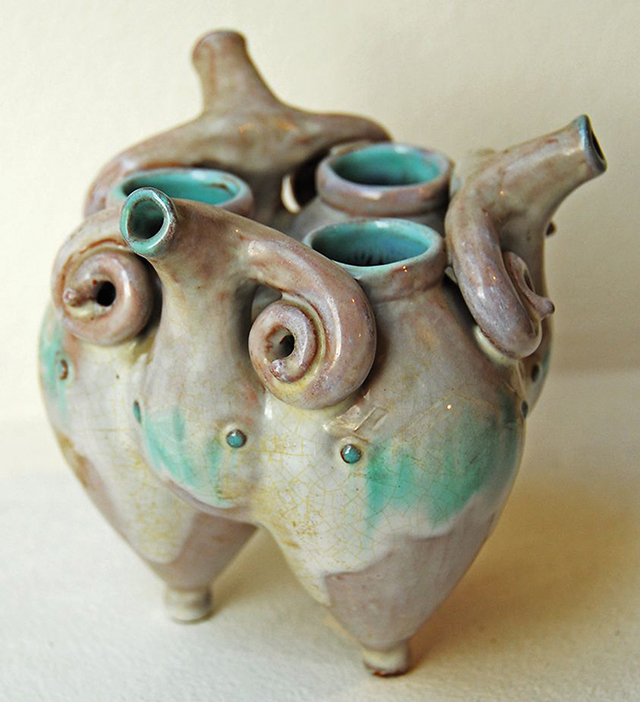 What attracts you to this field?
Clay is soothing, it’s beautiful. My works are folk and traditional. Everything is done in the old Georgian method. It’s about beauty. I like to use white and green, as they are traditional Georgian colors, used on ancient pottery.

What are you working on now?
I do what comes to me in the moment. It depends on my mood. Right now I’m making flower vases. With clay, you can sculpt whatever you want. I look at the works of my father, brother, and grandfather for inspiration, sometimes I think up something new. I want this craft, which is so old, not to be lost, and to be continued by the next generation. There were many craftsmen in Gori, but now I’m the only one who works on traditional vessels. 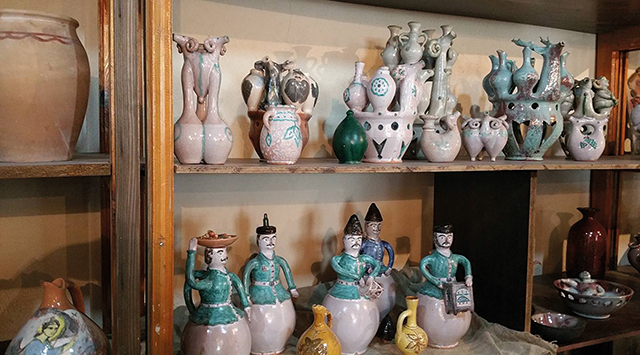 What makes ‘Marani’ wine vessels so special?
It’s a historical wine drinking vessel, and my ancestors would create them. The spout can be the head of a deer, sheep, goat, or a bull, as long as wine can be drunk from it. In the past, almost every family had this kind of vessel at home.

Do you have any other such unique works?
Not now, but I have pottery made by my brother 50 years ago. I do what my ancestors did. I’m a member of the International Cultural Center and the Traditional Craft Association, continuing our Georgian traditions.

What can be done to encourage young people to learn to work on ceramics and continue these traditions?
They do learn it, and young people come to me to study ceramics. This profession has become something of a fashion again today, and more girls are studying ceramics too.