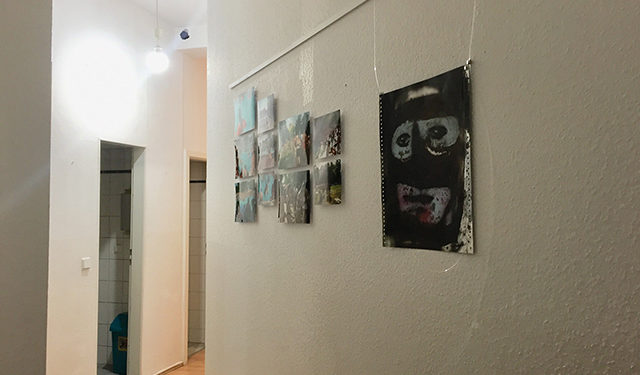 No-one can better understand women artists than women artists themselves. Teona Paichadze from Georgia has been painting women as the sole subject of her works for decades already. Women voyeuristic objects, naked women, women with guns pointed at the viewer, women in all sorts of poses, with cigarettes or without, in bleak surroundings of desolate urban landscapes, or simply in yellow or greenish-blue, sometimes in the dark that makes the women’s faces like masks. It seems Teona’s work is more on the dark side, but what is not these days? The fate of contemporary women in Georgia and anywhere else in the world is far from bright and sparkling contrary to the glossy lifestyle magazines that would try to persuade us of the opposite. Contemporary women’s lives are full of drudgery, and the nudes by Teona Paichadze show the naked truth of it.

The landscapes by another Georgian artist, Ia Arsenishvili, also on show at the exhibition Work Show 1 curated by Lily Fürstenow, are more colorful. These are beautiful landscapes inspired by the Georgian seaside, meadows, forests and the rich variety of the Caucasus with its characteristic natural diversity. The landscapes are done with much sensitivity to color, light and a profusion of pictuesque detail, depicting the Georgian countryside where the artist spends much of her time in her private residence outside the city. Here, too, although in a more colorful style, one can trace the painter’s desire to escape into an imaginary fantasy world where idealized natural serenity reigns and the colors flow and are perfectly matched. An imaginary idyll that hardly exists anymore but in the dreams of a painter.

The curators matched with Ia Arsenishvili’s landscape beautifully a delicate white porcelain piece by German artist Melanie Moeglich, posing a troubling question about what one’s soul desires- meaning here not just a fleeting desire, but an inner core aspiration in the times of affluence and economic prosperity sometimes troubled by wars and pandemics. What one’s inner self really desires might seem a trivial question, but does anyone know the answer? Or even trouble to answer?

On the opposite wall, one finds an ironic response: give-away paper bags by Rosika Janko Glage framed and painted over with images of wastelands full of rubbish in third world countries, with African kids cleaning or gathering left-overs dumped carelessly and rotting away.
Western consumer culture, excessive tourism and globalized economies of abuse are also a topic with

Semra Sevin, whose photographs in heavy glass frames come next in the show. These depict immediately recognizable Berlin city highlights, like the Theater of Volksbühne, which would translate from German as folk’s using the traditional East Berlin communist folklore emphasizing the theater stage. The photograph depicts the controversial sculpture symbol of the Volksbuhne. A wheel on short poorly sketched legs, likely symbolizing the motion process at infant stages, this sculpture remained in the limelight for quite a time recently after it was removed from the square in front of the theatre, when infamous theater director, curator from London Chris Derkon, tried to restructure the Volksbühne in a move to modernize it, but failed due to the opposition of the Berlin art scene. As a result, the wheels sculpture was returned to its original place and the future of the Volksbühne is still to be decided. 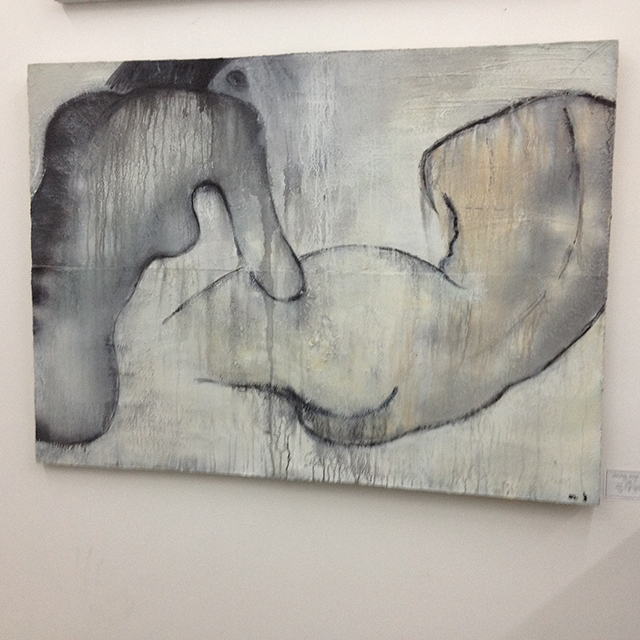 Other works by Semra depict such touristic icons as the Oberbaum bridge brucke, and the East Berlin TV tower. These are photographed through a lens that would distort and disguise them in a monstrous manner that would question their hype and purpose. What would Berlin be without its hype? From a female perspective, the city TV tower is just a symbol of media domination. Berlin is a city full of opposing parallel universes, like the Prinzenbad swimming-pool where people come together to enjoy and share.

The artist, Melanie Moeglich, was here, and captured glimpses of the swimmers out on a sunny day. Like in times immemorial, water is here shown as a place of communal gathering; a source of life and regeneration; as in the depictions of paradise scenes of rejoicing people with Matisse, bodies rejoicing in the nature. The group of photographs is spontaneously arranged along the corridor wall and would comfortably fit into someone’s private sitting room to remind of a beautiful weekend captured by a frivolous camera.

Speaking of private apartments and sitting rooms, last but not least in this Work Show are the interiors by Paula Carralero Bierzynska made in colorful brushstrokes upon silk stretched on wooden frames. One almost sees through the silk when the light shimmers on it. These light silk canvases represent interiors and stage-like spaces in reddish-yellow with glimpses of green and ochre. A grand piano in the center of an empty stage waiting for the audience and the curtain to rise, the heavy curtain lending a concert-hall excitement to the serene interior. This work group reminds us of painting metaphorically being a stage for the whole world to be projected on, with us, the viewers, invited to contemplate and ponder upon the vanities of the world.

Having this in mind, Yair Meshoulam’s handmade rug hanging in the passage with its colorful motives of flowers comes here as an oasis of bloom intruding into the strictly ordered space. Chaotic and flamboyant, it bursts out the motives of nature to create a poetic disorder of ornamental curves. The somber saturated colors remind one of an oriental carpet.

The Work Show 1 running during the Berlin Art Week is the first in a set of exhibitions focusing on the artistic practice of female artists who submitted works to the X-treme Women Art Prize organized by Martina Singer and curator Lily Fürstenow-Khositashvili with the support of the Scholarship of the deutscher Künstlerbund / Bundesprogramm Neustart Kultur. More information about the project is on the www.e-mergingartists.art online platform supporting women in arts. The exhibitions will run until December 2021 at Brunnenstrasse 145, 10115 Berlin at the Nachbarschaftszentrum Brunnentreff community center.