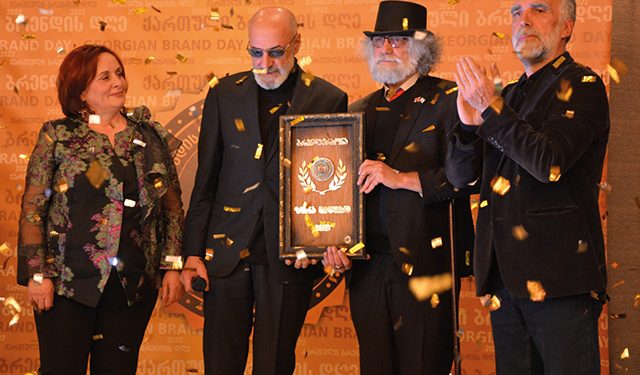 One of the outstanding events of the year “Georgian Brand Day 2022” was, as per tradition, a brilliant success. The event was held on December 28 and some 30 individuals and companies were awarded in various nominations according to their merits. The award ceremony was held in Pullman Tbilisi Axis Towers and was attended by 200 invited guests. As a number of representatives of the companies mentioned, they wait for this event with great enthusiasm every year. According to them, “Georgian Brand Day” has a special value in the field of business development, because it encourages them to be more active and present themselves in the best way. In addition to companies and individuals, the brand-personality title, which this time was awarded to Zura Kipshidze, is especially noteworthy.

In the event held on December 28, the winning companies were named in five nominations – “Leader”, “Reputation and Trust”, “Successful New Brand”, and “Successful TV Project,” among the winners of which were PSP Group, Telavi Wine Cellar, and Media Holding “Fortuna.”

In the nomination “Reputation and Trust,” Manana Mania was named Fashion Designer of the Year, whose collection was presented at the event by the most fashionable ladies Ani Amilakhvari, Tako Chanukvadze, Eka Chkheidze, Anka Vasadze, Cisana Sefiashvili, Lelo Tchkereuli, Nino Tarkhan-Mouravi and Marina Kakhiani.

In the same nomination, the “Reputation and Trust” award was given to the direction of Zviad Bolkvadze of the Guram Kurashvili State Choir Capella, who enticed the audience with a performance of “Lale”. Author-performer Nato Gelashvili, who also won in the same nomination, together with his children, entertained the audience with his hit “December”.

2022 was special for the Georgian Brand Day project as it now counts 20 years of existence and celebrates its anniversary date.

Last year, the Georgian chess legend Nona Gaprindashvili was awarded with the Brand-Person title. This year, she was also present, and her appearance led the hall to great applause.

The event lasted two hours and with it, another successful chapter was written in the history of “Georgian Brand Day.”