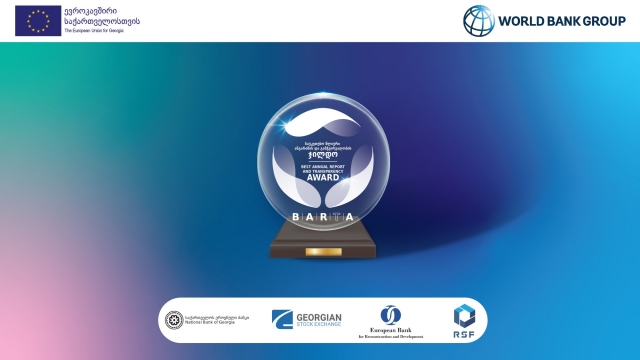 BARTA, first launched in December 2019, is a part of a concerted effort to address the challenges in quality and transparency of corporate reporting of Georgian companies. Following the enactment of Georgia’s new Law on Accounting, Reporting and Auditing in 2016, this annual award is intended to encourage compliance with new reporting regulations, foster healthy competition between companies, and improve the overall standard of corporate reporting as part of the country’s quest to build up investor trust and confidence at local and international levels.

“The European Union congratulates Georgia for visible progress in the financial sector,” said Sigrid Brettel, Head of Cooperation of the European Union Delegation to Georgia. “Now, following the recent experience of larger companies, also the smallest ones are entering the forefront of financial reporting and transparency. This is good for business, for investors and Georgia’s overall economic development.”

The award ceremony, held virtually today, showcased 18 nominated companies, and was presided over by a distinguished international panel of judges. The selection process was conducted using a robust methodology that emphasized, among other things, the provision of non-financial information which addresses intangible assets such as brand, customer reputation, know-how and goodwill that drive corporate value.

“The success of Georgia’s economy increasingly depends on the ability of the private sector to attract funds from investors at home and abroad,” said Sebastian Molineus, World Bank Regional Director for the South Caucasus. “Investors, in turn, are looking for higher levels of transparency, which is why I believe that initiatives such as BARTA are so important to further develop the Georgian business environment and boost investor confidence in Georgia.”

The winners in each of the 4 award categories, announced today, are as follows:

“While there are only 5 winners, all nominees deserve recognition, because they all met strict criteria for shortlisting and, thus they have all won,” said Giorgi Tabuashvili, Executive Chairman of RSF. “I hope that other companies can learn from these winners, and the friendly competition will drive the overall quality of reporting upwards.”

PM to Lloyd Austin: Your Visit is Strong Message that US Supports Georgia’s Sovereignty, Territorial Integrity