Georgia and Its Transit Potential 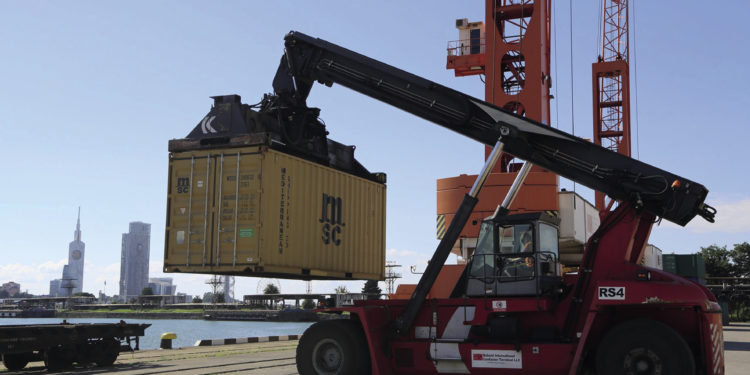 Georgia might be a small market, but this deficiency can be substantiated by the country’s location. Georgia has historically been at the edge of empires and entire continents – Asia and Europe. This has been both an asset and a hindrance to the development of the country. A hindrance because it attracted foreign invaders, an asset because Georgia’s location allowed the country from time to time to position itself as a major transit territory between Europe, Central Asia, and China.
Since 1991, a new Silk Road concept has been gradually emerging at the borders of Georgia. In fact, a closer look at historical sources from the ancient, medieval or even 15th-19th cc. history of Georgia shows an unchanged pattern of major trade routes running to the south, west, east and north of Georgia. Those routes were usually connected to the outer Middle East, Central Asia, and the Russian hinterland. Only rarely did the routes include parts of the Georgian land and, when it happened, it lasted for merely a short period of time as geography precluded transit through Georgia: Caucasus Mountains and seas constrained movement, while general geographic knowledge for centuries remained limited.
After the break-up of the Soviet Union, Georgia returned to its positioning between the Black and Caspian seas, between Central Asia and Eastern Europe. Major roads, pipelines and railway lines now run through Georgian territory. Moreover, major works are being done to expand and build existing and new Georgian ports on the Black Sea, with the potential to transform Georgia into a sea trade hub.
A good representation of Georgia’s rising position on the Silk Road is a major bi-annual event, the Silk Road Forum, held in Tbilisi since 2015. The hosting of the event underscores how Georgia has recently upped its historical role as a regional hub connecting Europe and Asia. On the map, it is in fact the shortest route between China and Europe, which could in turn make the country an increasingly attractive destination for foreign investment. Indeed, the regional context also helps Tbilisi to position itself, as Georgia has Free Trade Agreements with Turkey, the CIS countries, the EFTA and China, and a DCFTA with the European Union, comprising a 2.3 billion consumer market. These are those advantages which can be leveraged by the European business community in their quest to penetrate the far-flung regions of Central Asia and the Middle East.
Thus, from a historical perspective, the modern Silk Road concept emanating from China arguably represents the biggest opportunity Georgia has had since the dissolution of the unified Georgian monarchy in 1490 when major roads criss-crossed the Georgian territory.
Another asset is the newly built Baku–Tbilisi–Kars (BTK) railway opened in 2017 by Azerbaijan’s President Ilham Aliyev, Turkish President Erdogan, as well as then-Georgian Prime Minister Giorgi Kvirikashvili, at a ceremony to launch the railway which stretches from the Caspian Sea port of Alat to the city of Kars in eastern Turkey.
This set the scene for improved connectivity not only in the South Caucasus, but also for the landlocked Central Asian states. The project opens a rail corridor potentially connecting Central Asia with European markets through the South Caucasus.
And Central Asia matters. To reach the region, Georgia and its infrastructure are critical. What is crucial here is that the shortest route to ship freight to Europe from Central Asia is across the Caspian to Azerbaijan, Georgia and the Black Sea. The steady growth of shipments from China will further boost the fragile South Caucasus transport and energy corridor, which struggles to compete with enormous trade routes which go through Russia and elsewhere.
What makes the Caspian route more interesting is the progress made in port development in Azerbaijan and Georgia. The ports of Baku and the small city of Alat have notably improved their infrastructure over the past several years.
Similar trends of improving infrastructure are being seen along the rest of the South Caucasus corridor. The Georgian government granted the APM Terminals a permit to start the expansion of Poti Port. Essentially, the project, which will add more than 1000 local jobs, involves the construction of a separate new deep-water multifunctional port.
The project consists of two major phases: the first stage of $250 million will take around 2.5 years to complete and will involve the development of a 1700-meter-long breakwater and a quay with a depth of 13.5 meters. The second stage envisages a 300-meter-long container quay. What is more important for the infrastructure of the eastern Black Sea region and the geopolitics of transcontinental transshipment, the expanded Poti Port would have the capacity to receive Panamax vessels.
The expansion of Poti will have regional implications. The port already enjoys the role of the largest gateway in the country and is a major outlet for Azerbaijan and Armenia’s trade with Europe. For instance, liquids, passenger ferries, dry bulk and container traffic go through Poti. Poti Port also serves as an alternative route for export from Central Asia to the Black Sea and elsewhere.
Similar developments are taking place in Batumi. In 2019, Wondernet Express, Trammo and the Government of Georgia announced plans to build a new terminal with a total investment cap of 17.5 million Euros. The new facility will be able store tens of thousands of tons of mineral fertilizers coming from Central Asia through Azerbaijan.
These connectivity trends will reinvigorate Trans-Caspian shipping, but there is still more to the story, as both Europe and Turkey are interested in breaking Russia’s grip on gas export routes from Central Asia. Support for the east-west corridor across the South Caucasus has been present since the break-up of the Soviet Union, but rarely have there been such promising trends as there are now: steadily increasing China-Europe shipping; the Chinese Belt and Road Initiative’s expansion into Central Asia; and gradually improvement of rail, road and port infrastructure in Georgia and Azerbaijan.

Meet Visa: Reintroducing the Iconic Visa Brand to Everyone, Everywhere