"For Georgia" urges the Government to admit problems 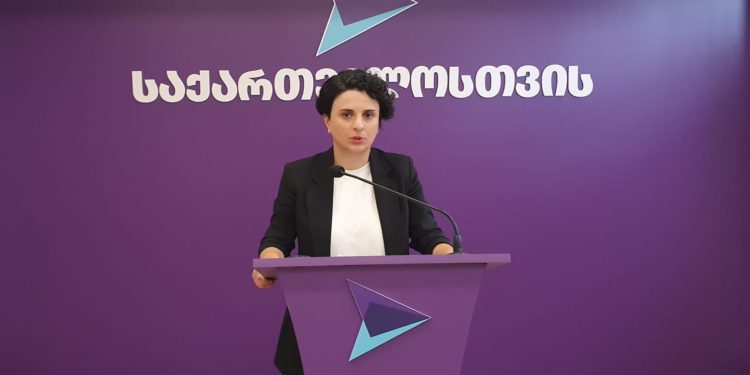 Natia Mezvrishvili - Deputy Chair of the party "For Georgia"

“The situation today, that Georgia has been separated from the “Associated Trio“, is the sole responsibility of the Georgian Dream party!

“We should all thank Bidzina Ivanishvili, Irakli Kobakhidze, Irakli Garibashvili, Kakha Kaladze, and the rest of GD for the situation in which Georgia, previously front-runner of the Associated Trio, is now perceived by the EU as a country not fit for membership candidate status! This is your sole responsibility and you cannot escape it; the Georgian people and the country will not allow you!

“On many occasions, we have warned GD to acknowledge the problems and take responsibility for the implementation of the fundamental reforms. Despite this, GD was ready to pay any price for retaining the power and as a result, you gave the choice to Georgian citizens – Ivanishvili or European Union.

“GD does not have any more trust. In order to regain the trust of citizens and the European Union, first of all, GD should acknowledge the problems and start solving them! If you really want to preserve the European perspective, you should immediately admit that the Oligarch is ruling the country and therefore deoligarchization is needed. GD should admit that all problems mentioned in the decision of the European Commission actually exist.

“After you admit the problems, immediately, before June 24, take responsibility to implement reforms that will correspond to the requirements set by the Commission and accordingly will ensure the Holding of free and fair 2024 elections, real power-sharing, effective parliamentary oversight, an independent judiciary, restoring constitutional order in the country thus supporting the deoligarchisation of Georgia, prevention of authoritarianism and democratic development of the country.

“We will present a specific plan and urge GD to immediately start implementation of the present plan, to ensure that Georgia manages to rejoin Associated Trio by the end of 2022!”

“We urge the Government to immediately start the implementation of the plan elaborated by us, which will directly respond to the requirements set in the document issued by the European Commission on June 17, 2022, and will save the EU perspective of Georgia

1. Fundamental reform of the court system, which aims at the transformation of the logic of influence deeply rooted in the system for years, eradication of the „influence group“, instead of further improvement of the legislation alone. Based on a wide consensus, prepare legal amendments regarding the High Council of Justice (HCOJ), which currently serves as an instrument in the hands of an „influence group“. Before the fundamental reform, to create an alternative power center and restrict the power of „influence groups“ in the HCOJ, immediately take steps: 1) Parliament to immediately elect 5 non-judge members of the Council; 2) Parliament to immediately approve legal amendments, envisaging election/appointment of judges with so-called „double 2/3“ (2/3 of judge and non-judge members of the Council).

2. Fundamental reform of the General Prosecutor’s Office, with the main aim to eliminate the „influence group“ in the Prosecutorial Council. This will reduce the risks of the appointment of the prosecutors loyal to the ruling party. With adequate public engagement, elaborate legal amendments aimed at the creation of effective guarantees for the independence of individual prosecutors.

3. Fundamental reform of the police, which will be aimed at introducing the concept of independent police – Investigative and other police functions to be separated and the head of police no longer be a political appointee, he/she will be elected by the Parliament based on political consensus between the parties with 2/3 of the total number of MPs

“Implementation of the mentioned action plan will ensure free and fair elections, including free of corruption and systemic violations; restore constitutional ruling; ensure functional power-sharing, an independent justice system, eradication of corruption (including elite corruption), improvement of the social-economic environment, functional protection of human rights and ultimately deoligarchisation of the country, prevention of authoritarianism and saving democracy.

“We are ready to start a joint work on the implementation of this plan in any format, which will be a direct answer to decrease polarization as requested by the Commission.

“Otherwise, we will consider that the current Government and GD does not express the historic will of the Georgian people about the European future and Georgian citizens will have the legitimate right to launch a national movement for saving Georgia’s European future,” Gakharia’s party writes.