From “Mikhailov” Hospital to Art Center – to Implement the Idea, Tbilisi Hosts the Greats of World Architecture

"We leave the original, but we add something new to it" - the world's most authoritative companies will compete for the construction of a modern museum 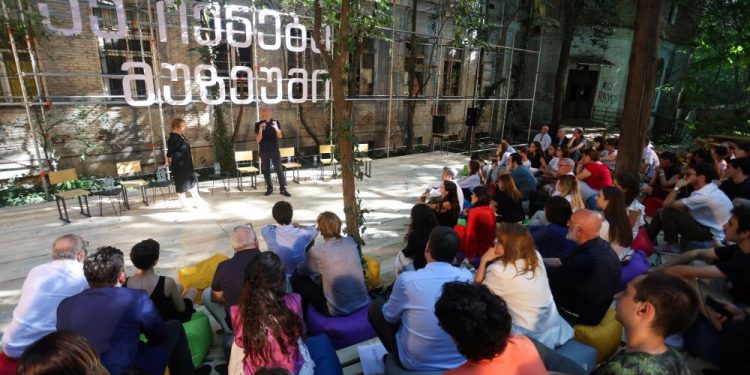 On July 6, the new owner of the former “Mikhailov” hospital, Georgian businessman Shalva Breus, hosted media, a group of world-leading architects, and representatives of the art field in the yard of the former hospital, where he talked in detail about what the modern art museum will be like.

The businessman bought the property at an auction in March for 16 million GEL on the condition that he would open a museum of modern art there and would invest 30 million GEL in it.

At the presentation of the idea of ​​the modern art museum, Breus said that he could have set up the museum in Venice or Brussels, but as he was born and raised in Georgia, he chose Tbilisi:

“Brussels city hall offered us a place in the city center for free, but, to be honest, I have nothing to do with Brussels. The second option was Venice, I am there more often and spend a lot of time there. We chose a place in Venice, it was a very good line, but I decided to build a museum in Georgia instead. The reason is very simple – I was born and grew up in Georgia, I love Georgia,” the businessman said.

Breus also talked about the concept of the museum and how this space will be different:

“This museum will not be a temple where people come and pray… It will be a home for young people – one can enter our museum with a skateboard, put it against the wall, sit down, open a laptop, work, and leave. We will not call the museum a museum. The museum is granted the status of a museum by the state. We will be an art center. Independent. For example, the Pompidou Museum is an art center, the Jokhtaberidze Museum is a museum. Everyone has their choice. I choose the Art Center to be absolutely free from all kinds of bureaucracy,” – this is how Shalva Breus expressed his vision. 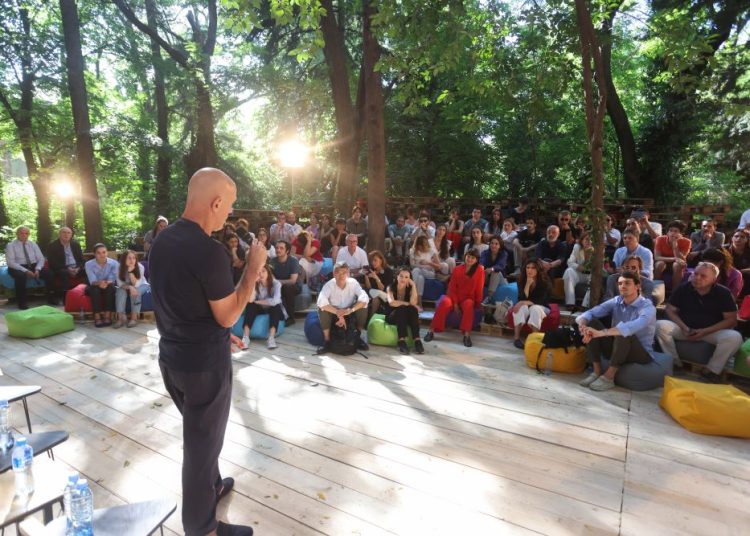 Breus says that along with the museum, a “sculpture park” should be organized there, and one of the competitive requirements for the architectural firm will be experienced in this field. As for the exhibits, the businessman notes, initially the works from his personal collection will be exhibited there, after which the museum itself will work on expanding the collection.

Shalva Breus made a promise that as a major collector of modern art, he will make the works collected over the years the main collection of the Tbilisi Museum and will keep the works in Tbilisi.

“My private collection will be the basis for the museum itself. But the main thing and it is very important that the museum not be limited to one person’s collection. Therefore, our task is for the museum to work independently on the distribution, enlargement, and promotion of the collection,” Breus stated.

All companies and architects participating in the competition have one vision and one goal: to preserve the old while enriching it with new visions.

“What we saw here is very attractive. It will not be art for art’s sake. It will be a public space. We have wonderful antiquity and there is no need to change it absolutely. It gives the impression of ruins, but the initial structure of the buildings is very good. An architect not only builds but also destroys. Mistakes are also common. We should pay attention because what we saw here is very valuable,” said Gantenbein.

“When we got familiar with this space, we were convinced that after the implementation of the project, it will play a very important role in the cultural life of Tbilisi and the cultural landscape of Tbilisi,” said the representative of Emre Arolat.

As the representative of the Shigeru Ban company says, Georgian architecture is very similar to Japanese architecture.

“As soon as I arrived, I saw the convergence of Georgian and Japanese architecture. In Japan, we have this kind of doctrine, there is no boundary between the outside and the inside. The biggest challenge is that we don’t try to fundamentally change anything about this building, we leave the original, but we add to it and make it new,” said Taro Okabe.

“This is an incredibly impressive place, it can be said that it will bring fantastic results. We have carried out such works many times in London, Madrid and elsewhere. This is an incredibly good way to preserve the old, on the one hand, to give it some freshness and to trace the way to the future. It will be a fusion, using the old through a new vision,” says the architect and representative of Herzog and De Meuron  Olga Bolshanina about the project.

Borina Andrews, a representative of Wilmotte & Associates, says that working on this project is a unique moment:

“This is our first experience working in Georgia. This is a truly unique moment. It is rare to have such a large area in the middle of the city. There are a lot of antiquities here, and our company has the expertise to bring those antiquities together with the modern,” says Andrews.

As for the company Archea Associati and its representative, Francesco Simonin called the project “an emergency.”

“We always follow a certain design, but this is an extraordinary case. This type of space requires persistent work, and I think we will get quite positive results in the future”, said Simonin.

Academician Valery Asatiani was present at the meeting/dialogue with the invited guests. As he mentioned in conversation with us, the connection of eras will be reflected in the project. 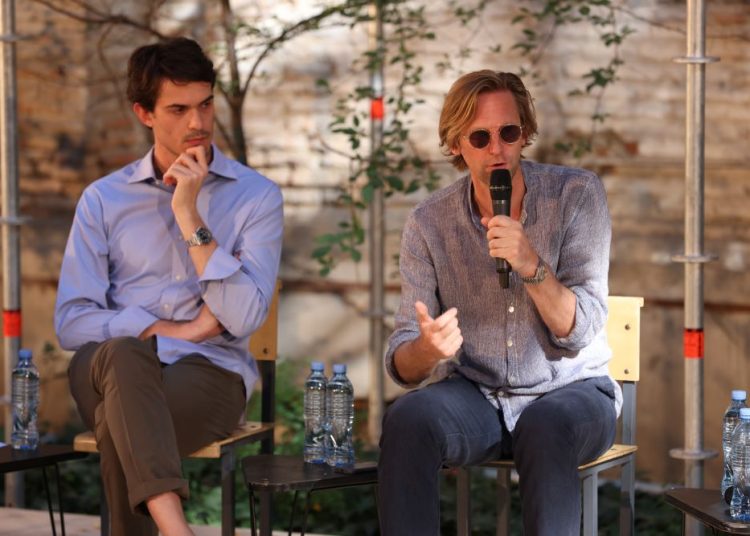 “After a dialogue, we were convinced how seriously the problem is viewed. A project is to be decided, what is conceived. In this case, we are talking about preserving the historical appearance, the importance of the architectural monument. The projects that the companies present architecturally will be the subject of very serious judgment. All this will be highly transparent and public, everyone will participate in the discussion. Foreign architects, who have a great background, are very careful to take into account the national specificity, climate, character, appearance of the city, traditions, and the specificity of the park culture. All this will happen in cooperation with Georgian colleagues. Overall, it’s a very important idea. The space opens up for a new quality of education, not only in fine arts, but in general, I mean culture in a broad sense. It will be a hub of multicultural purpose, where all the muses will have a place, as well as fine arts, musical arts, verbal arts, and theater, it will be a meeting place. As I see it, everything is moving towards turning it into an educational center, which is most important for the future of Georgia. In this great project, the connection of times will be reflected,” says Valery Asatiani.

The Museum of Modern Art, which Shalva Breus plans to set up in Tbilisi, should be opened in 2028,  as per the investment conditions and we will have to wait until November 2022 to find out which architectural company will take over the project and which of them will be able to turn the Mikhailov Hospital into a modern art museum.

Shalva Breus, who was born and raised in Georgia, is known among modern art lovers around the world as a contemporary art expert, and a member of the jury of a number of international competitions, including the Marcel Duchamp Prize and the Guerlain Prizes for painting and graphics, a publisher, collector, and philanthropist. His collection of modern paintings is also recognized worldwide, the core of which is the works of German expressionists. The collection is rich with samples of modern Georgian paintings. 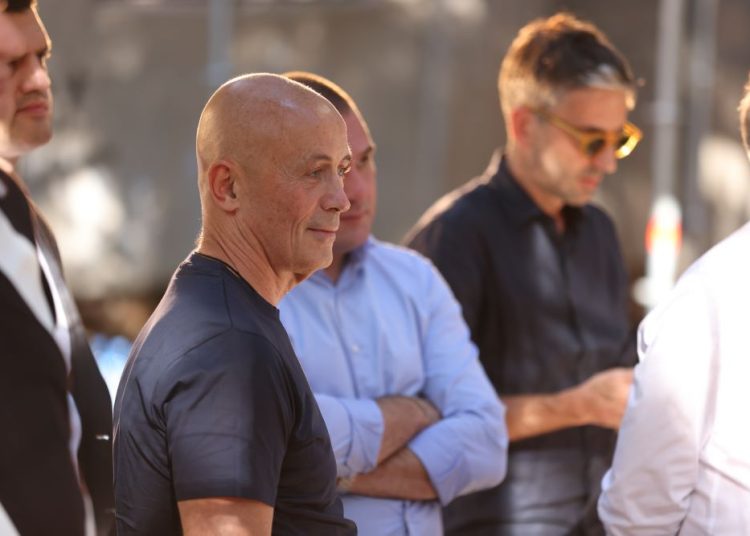 Breus has founded an international fund under his own name, the Kandinsky Prize founded by him, along with the British Turner Prize and the French Marcel Duchamp Prize, the 3 leading prizes in the world of contemporary art.

The Museum of Modern Art is not the first to be built under the initiative and leadership of Breus. The modern art expert has implemented a number of charitable projects in Georgia, among which the restoration of the Neveli Church in Abastumani and the preservation of unique frescoes by Nesterov are noteworthy; The construction of the Holy Trinity church complex on the Mount of the Holy Trinity in Batumi, which has already become a niche of the city and due to which it was awarded by the Catholicos-Patriarch of Georgia with the highest ecclesiastical order, the Cross of St. George. His name is also associated with the restoration of the lost tradition of church mosaic in Georgia. 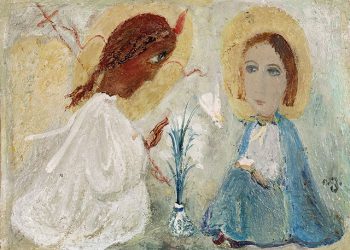 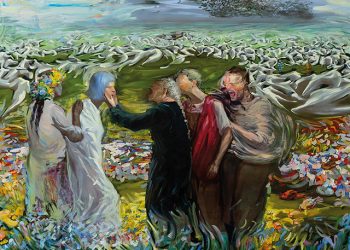