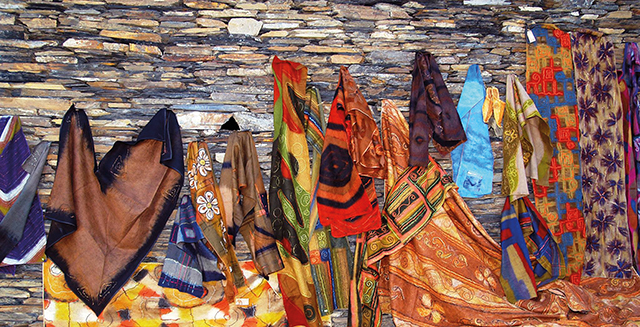 There are several prominent Georgian artists working in the technique of felt. Artists create decorative panels, as well as accessories and clothing. Some of them collaborate with art galleries and exhibit their work at art fairs in Georgia and abroad. Source: Georgian Felt

Woolen goods apart from carpets, get scant attention from the Tbilisi tourists thronging the stalls and shops on Rustaveli Avenue and in the Old Town. Yet the history of Georgia’s textiles is quite as ancient and prestigious as that of the jewelry and ceramics which tourists favor. Felt, one of the oldest of fabrics, however, is now enjoying growing demand both among Georgians and internationally via the websites of crafts people, artists, and overseas interior designers.

Much of Georgia’s feltwork is basic items, “simple products for women to turn into a business,” as Vanda Mujiri, owner of the Vanda Gallery in Mtatsminda, puts it. The materials are easy to find, inexpensive, and can be worked in a wide variety of ways – made with dry or wet felting or with needles and embroidered or combined with other material. At Tbilisi’s Dry Bridge Market, there are usually lines of brightly colored scarves, slippers, and toys swinging in the wind, most for under 70 Lari.

At the up-market end, prices can be in hundreds if not thousands of dollars for throws, jackets, and artwork. The traditional wool centers, such as Tusheti, display local felt art and craft, and trailing around Tbilisi boutiques or hitting the search engines may not result in a good find. The best opportunities can be found on websites such as Etsy, FeltArt, Pinterest, Facebook (if you know the artist’s name) and Amazon, or at the annual EthnoFest craft fair in Tbilisi.

Then there is the Shardeni Street atelier, which shows among others one of Georgia’s most famous felters, Tinatin Kldiashvili, whose work (priced at up to $2,000) has featured at fashion shows and in galleries in Europe, the US, and Canada. A professor at Tbilisi State Academy of Art (and formerly its dean), she has led the revival of interest in Georgian traditional textiles and established a craft school to teach the making of felt, a strong factor in its increasing production. She also led the restoration of the manufacture of Georgia’s UNESCO-recognized ‘blue tablecloth.’

Artists’ interest in felt is giving a welcome boost to the quality of Georgian textile crafts, which the Georgian Arts and Cultural Center bemoaned a few years ago as being “often of low quality.” Regretted were the “garish synthetic dyes,” “clumsy stitching,” and “souvenirization” of works created with more thought to time-saving than skill.

“There are several prominent Georgian artists working in the technique of felt. Artists create decorative panels, as well as accessories and clothing. Some of them collaborate with art galleries and exhibit their work at art fairs in Georgia and abroad,” explained Vanda Muijiri, whose Vanda Gallery has organized textile exhibitions.

Many artists have turned their hands to this traditional Georgian medium using various techniques with a vast range of outcomes. Among the many are the bold work of Ana Lagidze, the intricate textiles of Maia Tsinamdzgvrishvili, the glorious colors of Russo Bukhnikashvlii, the fascinating textures of la Gulisashvili, and the sophisticated clothing styles of Tinatin Kldashvili.

Felt through the ages
Production of felt historically played a central role in life in the Caucasus, Central Asia, and parts of the Middle East, it being one of a woman’s traditional tasks. In the mountain regions of Georgia, “a major source of income was the rearing of sheep and production of wool fabric,” and in particular, felt, says the US website Felt & Tapestry Art.

“Wool, the raw material, was readily available, the technology was portable and the fabric itself provided the highest level of insulation for clothing, floor coverings, and even for tent walls. From around 2,500 years ago, early nomadic peoples lined their tombs with felt, laid their dead on it, made decorations from it, wore felt clothes, and dressed their horses in masks made from it,” states the International Feltmakers’ Association’s (IFM) website, expanding on felt’s history in this region. It adds:

“Across the centuries, felt has been used for shoes, flooring, hats, sieves, armor, coats, tent covers, and bedding, not only by nomadic people, but also by numerous sedentary populations in this region. Indeed, few societies in the past were entirely without felt.”

Unlike in France’s wild Ardeche region, where young people enjoy farming sheep for cheese, meat, and wool, Georgia’s young people see little that is attractive in this way of life

The IFM continues: “Felt fabric is also used for the treatment of various diseases due to its 100% natural wool composition. Wool contains the active substance lanolin, which protects it from external pollution. It is known for its positive effects in the treatment of rheumatism, arthritis, sciatica, lumbar and spine pain.”

Felt has always featured in Georgian traditional dress – the arkhalig (hood), chokha (high-necked, swing-back coat), and kabalakhi (skull-cap). Even in Soviet times, wool production and wool crafts were encouraged (though this was largely a response to soaring international prices for Georgian carpets, according to the Georgian Arts & Cultural Center), GeoStat figures show the sheep population in the 1950s at around 2.2 million.

Sheep shortages and profitability problems
Since the 1990s, sheep numbers have plummeted, fluctuating around a million following the loss of grazing pastures adjacent to the Caspian Sea. The result of that loss was “…unsustainable management of pastures, which was mainly expressed by intensive grazing and an excessive number of sheep. Today, the nomadic-pasture system is a widely spread practice in Georgia, which requires the use of pastures for feeding during the year. The shepherds have to walk hundreds of kilometers between winter and summer pastures,” states the report ‘An Overview of the Sheep Sector,’ from Tbilisi State University’s ISET Policy Institute.

Unlike in France’s wild Ardeche region, where young people have been drawn to the eco-life-style of farming sheep for cheese, meat, and wool in its vast chestnut forests, Georgia’s young people see little that is attractive in this way of life. Add in the low profit-margin on wool, and it is unsurprising that those (usually in Kakheti, Kartli, and Samtskhe Javakheti) who do go in for sheep-rearing, tend to be focused mainly on the live sheep export trade. So far this year, Georgia has earned $17 million exporting live sheep and goats to Azerbaijan and the Middle East for meat.
Given the lack of storage and processing facilities, as well as the low levels of interest in the coarse wool of Georgia’s most common sheep breeds, many farmers do not even bother to keep the wool, and either burn it or throw it away. Great though it is for carpets and ease of felting, is not comfortable to the skin. Much of what is sold goes as exports in its rawest form, and thus has very little remunerative added value. So some Georgian craftspeople making clothes import soft wool felts and spun wool from Europe and elsewhere.

Georgia is missing one major market. Although around 60% of felt is used in clothing, according to IndustryArc researchers’ report, there is increasing international use of felt for architectural insulation

While USAID and EU training, sustainability and women’s programs, Tinatin Kldiashvili’s craft school, and growing consumer interest in natural as opposed to synthetic textiles, have all helped improve Georgian wool’s status and use, sheep farming and felt production remain in relative decline. By contrast, the global felt market is booming, with a forecast of 15.4% compound annual growth to $1.6 billion by 2026, says India’s Transparency Market Research group, which puts natural fibered textiles as the fastest growing. The pure wool market for all textile products is forecasted to reach $32 billion.
The disparity between Georgian and global trends comes mainly because it is missing one major market. Although around 60% of felt generally is used in clothing, according to IndustryArc researchers’ report, there is increasing international use of felt for architectural insulation. Heidelberg Cement’s Georgian operation has been, it is reported by ISET, talking to the famous wool production center in Tusheti, but no large-scale consumption of wool can be envisaged.
There are signs of innovation in Georgia as shepherds struggle to defy the odds against them. In Tusheti, with the help of the Czech Development Agency, local shepherds have formed a co-operative to shear sheep, and the Arindauli family have established a badly needed processing plant. Yet this wool production is aimed at Azerbaijani carpet makers just over the border rather than Georgian felt production. Georgian farmers desperately require more help if they are to supply the wool needed for the country’s thriving clothing-as-art market.