Faced with a Choice: Second Front or a Good Life 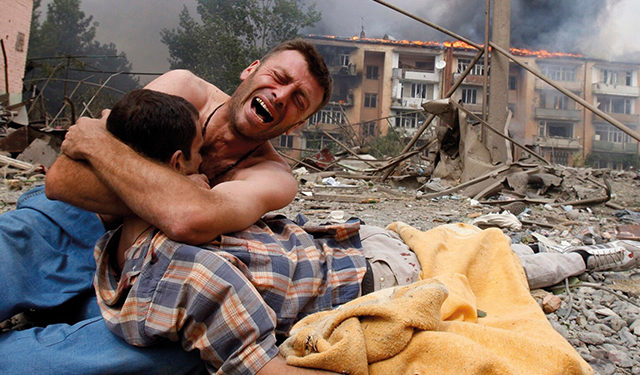 A Georgian man cries as he holds the body of a loved one after a Russian bombardment on August 9, 2008, in Gori, Georgia, near the border of the breakaway region of South Ossetia. Photo by Gleb Garanich (Reuters)

At times, the absurdity of the discourse put forward by politicians and analysts in our media acquires a ludicrous hue and content on both sides of the aisle. Our people have already gotten used to those endless incriminating verbal skirmishes between the opposed political forces, but there is always something new for further, even hotter discussion.

Take, for instance, the topic of opening a second front in the Russian-Ukrainian military conflict, already prolonged beyond any expectation. Nobody would be overly astonished if the Ukrainian political establishment demanded from the rest of the world the opening of a third, fourth or fifth front- it is quite understandable: they badly need additional headaches and pains for Russia’s tired and endangered neck, even if those stings and twinges from outside feel like a mere feather touch.

Ukraine has huge moral and material support in this long-invited warfare, support that reverberates around the globe, but it is a country in need of a much bigger, stronger and more meaningful shoulder than it is getting at this very moment. Ukraine wants those helpful and loyal nations to be involved in the conflict not only ethically and politically, but physically too, ‘physically’ meaning wounded and dying soldiers and volunteers, burning buildings and destroyed enterprises, miserably sheltered sick and hungry people listening to deafening alarms sounding day and night, this taking place in the lands of those nations as they are on Ukraine’s unrecognizable territory today.

We have barely recovered from our recent strategic errors, and now there are people who want us to get involved in the same old turmoil that put this nation at least half a century back in its development

And Georgia is one of those nations that the current Ukrainian administration expects and wants to immediately and unhesitatingly open a second front against Russia, so that their chance of a cherished victory can be brought closer and truer. To turn this pressing exigency into war, they go to the extent of flagrant verbal offences against the Georgian government, which in actual fact is doing all its possible best to provide affordable humanitarian aid and moral support to Ukraine, and at the same time is wisely, and with decorum, refraining from rocking the boat again, not having any substantial reason to do so.

Even if Georgia lost its mind and started fighting Russia in favor of Ukraine, how effectively would the much-talked-about second front prove in favor of Ukraine? Is Georgia really obligated to, in essence, repeat the mistakes of the past and remobilize itself for war against Russia; in defending the Ukrainian interests, putting at stake the good lives of its own citizens, giving up all that was acquired after so many vain and futile wars and defense efforts against Russia, once again damaging this country to a tragic extent?

We have barely recovered from our recent strategic errors, and now there are people around who want us to get involved in the same old turmoil that put this nation at least half a century, if not more, back in its development. No, no more sudden and stupid moves! We finally deserve a better way of life and a chance to peacefully develop ourselves, and there should not be even a vestige of a prospect that we might lose this God-given opportunity. We have our own business to do, and no longer should our young lose their lives as if those lives are not needed for the wellbeing of their own motherland.

Is this an unfriendly speak-out against the Ukrainian people? No, it is not! I talk about our own survival in the first place, and nobody in the world has the right to dictate to us what to do or not to do when it comes to our own future and quiet progress. Moreover, nothing, just nothing, is worth subjecting our citizens to what we have already gone through. After all, those awful times are so recent that all the wounds and pains are still felt, and those excruciating images are still alive. Enough!