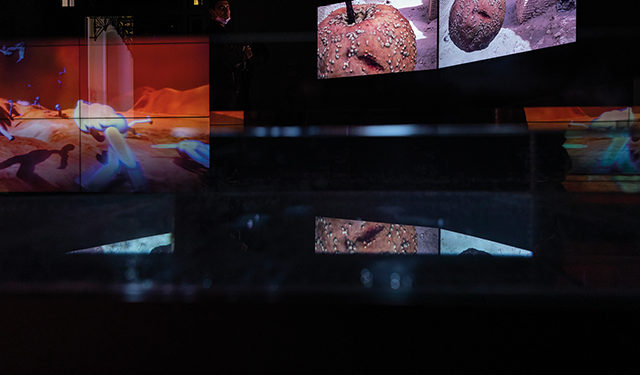 From October 28 to December 28, TBC Concept Flagship will host an exhibition of international artists, whose works will reflect the impact of the digital age on the work of artists. The title of the exhibition “Digital Natives” is the term of the poet and internet activist John Perry Barlow and unites people who had to adapt to digital technologies in the wake of the development of the information age from an early age. This is an exhibition on the Internet that answers the main question of how artists reflect on existing reality. The works of artists form one large network, which is as eclectic and comprehensive as the Internet itself. According to the curator of the exhibition Nina Kintsurashvili, the works in the exhibition address one specific aspect of the global phenomenon, where artists respond to digital reality both directly and indirectly. The exhibition, the idea of which was sparked by the Covid-19 pandemic period, brings together more than 10 international artists. The works presented at the exhibition, which are located in two different spaces, make the viewer a participant of the digital audiovisual show and present the specifics of the language of the artists in different mediums.
“There is an idea that the Internet is a global phenomenon, but the exhibition questions this notion and tries to highlight the local formations of the Internet, which were influenced by various socio-political contexts. For this, I decided to present several artists whose work is interested in the local context, “- said the curator of the exhibition Nina Kintsurashvili. “Very often in the West, when museums and galleries exhibit such works, one feels the admiration for technological innovations and new media. However, in this case I was interested in discussing the Internet in a historical context and exploring it not as a technological innovation but as a cultural and social phenomenon.
TBC Concept will introduce you to the works of some of the artists you will meet at the Digital Natives exhibition.

Tamo Jugheli – “Half – human, Half – machine
You will also meet the experimental work of Georgian artist Tamo Jugheli within the framework of TBC Concept Exhibition. The young artist, whose main creative practice is related to hand painting, exhibits a work at the exhibition in which the digital image she creates and the hand-drawn painting are synthesized into each other. “The work was created while learning Photoshop, which I have not yet learned because the more times I open the program, the more times I start painting. When this particular work was completed, I saw the moment in the material world as a painting. I printed the work on canvas and then added oil paint stains to contrast it with the human hand and its traces,” says the artist of the work, “Half-human, Half-machine.”

Nima Bahrehmand and Ramin Roshandal – The Status of Pieta
At the exhibition “Digital Natives” you will see many interesting works of foreign artists alongside Georgian artists. Among them is a one-channel video installation by Iranian artists Nima Bahrehmand and Ramin Roshandal, which is shown in the form of an audiovisual collaboration of artists. The creation of the work was due to the decentralized wars in the Middle East region, due to which the locals have to live under the constant supervision of drones and satellites. “For a year, Iranian artists fed artificial intelligence with war photos found in the region depicting drone escapes, and later AI independently produced similar images. “In these photos, the bodies are distorted by a computer and it is difficult to read information about them, but it is easy to read the same anxiety and uncertainty that the decentralized wars in this region brought,” said the curator of the exhibition.

Keu Meparishvili – Institute of Virginity
Keu Meparishvili’s video installation is presented in the form of a screen on wheels at the exhibition. According to the artist, the work was first created for a group exhibition in Vienna and shows the original version of the video installation in the TBC concept space. The research, which the artist conducted before creating the work, includes anonymous messages from closed Facebook groups where women share their confidential stories with other women. The protagonist of Keu Meparishvili’s work is an avatar of the collective experience of women, which illustrates issues related to modern myths related to the institution of virginity.

Bogosi Sekhukhuni – Conscious Engine 2: absentblackfatherbot
The exhibition will also feature a 2-channel video installation by South African artist Bogosi Sekhukhuni depicting robotic communications. According to the curator of the exhibition Nina Kintsurashvili, the work of the South African artist emphasizes the inconvenience of communicating on social media. The artist’s video installation shows two animated subjects facing each other through different screens. One of the animated subjects of the work is Sekhukhuni himself, while the other is his estranged father. Their communication is based on the letters that 18-year-old Bogosi and his father sent to each other for six years.

Tamar Gurgenidze – “How Wonderful Girls You Are”
Tamar Gurgenidze’s work at first glance reminds us of the compositions that we often come across while looking at old photo albums. Therefore, it is not surprising that the inspiration for creating the work was the photo archive of the artist’s grandmother, which is brought to life by Tamar Gurgenidze in three-dimensional videos. “In Tamuna Gurgenidze’s work, digital technology becomes a conduit of nostalgy, which the artist uses to reflect human emotions and flow of memories,” said the curator of the exhibition.

Nikoloz Kapanadze – IVR N29485
Those who come to the exhibition will definitely remember the work of Nikoloz Kapanadze. His audio-visual work explores the human relationship with an automated sound system.

Jon Rafman – Disasters Under the Sun
The work of Canadian artist Jon Rafman will be found in the exhibition space of the TBC Concept Dark Room. The posthuman dystopia shown in the video installation depicts a terrifying image of a future where all humanity is uploaded to a virtual purgatory and endlessly abused.

Anna K. and Florian Meisenberg – Cowntown BellaDonna
Georgian artist Anna K. and German artist Florian Meissernerg will present a 2-channel video installation at the exhibition. In the exhibition space, the screens are located next to each other, at a distance of several meters. Both of them show the human eye taken with a micro-lens and a 4K camera, at the depth of which the screen images are reflected. The moving images, which are generated on the cornea of the eye, depict excerpts from movies and Youtube videos, as well as footage from social media platforms. As the curator of the exhibition says while talking about the work, the video installation by Anna K. and Florian Meisenberg speaks of the organic body as a channel for the flow of information, where the screen represents a microchip that is directly connected to the cornea of the eye.
Within the framework of TBC Concept Exhibition “Digital Natives,” there will be a panel discussion with the artists. The exhibition is open Monday – Saturday, from 10:00 to 20:00, at 7 Marjanishvili street. Attendance is free for all.