COVID and the City – A Spatial Fracture in Georgia? 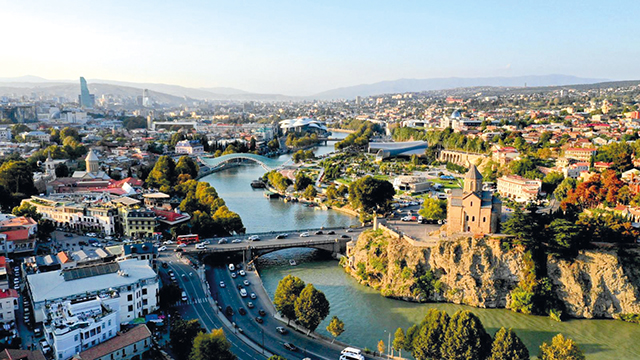 The COVID pandemic raises a vast number of questions for economists, though researchers have mostly focused on advanced economies and on the economic ‘scarring’ that the virus has inflicted. Not all, however, as a few economists have been interested in the likely evolution of cities after the pandemic. They observe that some cities, in particular travel hubs, have been epidemic hotspots, while many others, usually smaller, have been reasonably spared. More rural areas have also been less affected, although with strong variation across regions.

Importantly, there was also an exceptional real-life experiment: people were forced to work remotely. Many have since become accustomed to this way of life. Before COVID, they would go to their offices as a matter of routine, even when given the opportunity to work from home. Will this change? Once the pandemic is over, is it possible that these same people will decide to settle in the countryside, or another city, with the occasional trip to Tbilisi when strictly necessary? At present, it is not entirely obvious. Most scholars observe that past epidemics (some of which proved much more deadly than COVID) led to a short exodus, followed by a resumption in the trend towards large city centers. That trend, except for a few years every now and then, has been going on for centuries. Take Tbilisi: except before 2014 (for known reasons) when the population declined, the size of the city has since been steadily increasing. Could COVID change this? If the trend could be reversed (one third of the population lives in Tbilisi already) or even slowed, it would be good news for an urban infrastructure that is clearly under pressure.

These questions are significant, but their relevance has been exacerbated under the recent adoption of a decentralization strategy by the authorities. Once translated into law, it will give Tbilisi (and other subnational governments) the means to face future challenges, however, COVID may have changed the nature and magnitude of these challenges.

What do the economists tell us?
Migration to city centers is a symptom and sometimes result of the so-called spatial fracture. The concept is hard to define, but its origins go back to the late sixties when economists observed migration to the outskirts of city centers (note ‘outskirts’) by well-off families. Firms had established their activities in the suburbs, and those that could afford it settled near their employment. The poorer populations could no longer afford to live in those neighborhoods and migrated to cheaper houses in city centers where there were fewer job opportunities. This instigated a vicious cycle. It soon stopped though, as cheap and fancy flats in city centers, combined with the prospective of an active cultural life, attracted the young population and helped them settle in. The trend had reversed, and cities started growing again. Still, it is generally agreed that a greater distance to poles of activity increases the likelihood of unemployment and poverty.

As a consequence, remote areas are typically poorer and even stigmatized. But now that COVID has taught people to work from home, and that internet connections are reliable, things may have changed. Could it have an impact on the growth of cities? There are certain factors that could at least change the speed of the trend, perhaps even its direction.

Factors conducive to city center growth include:
• Not too many jobs can be performed remotely on a permanent basis and most require some in-person contact from time to time;
• Amenities in rural areas are not always sufficiently developed, especially if a large-scale influx of people (leaving Tbilisi) must be absorbed (schools, hospitals, even the internet, etc.);
• Cities will continue to be attractive to highly skilled young people who hope to avail themselves of the cultural activities on offer (notwithstanding the market for friendship and partners).
At the same time, there are factors that will act as a repellent to living in city centers, at least in the medium term, such as:
• A reluctance to take part in any activity that involves large crowds (public transport, movie theatres, restaurants, etc.);
• The loss of income experienced by wealthy couples, which may prevent them from entering (or re-entering) the urban real estate market;
• The need to stay in the city at times, for work-related reasons, may just prevent people from maintaining two residences, even if their flat in the city is not too large.

The case of Georgia
There are two main questions that must be asked: i) is there an important spatial fracture in Georgia that could make it unrealistic to settle outside Tbilisi? ii) how will the COVID experiment impact Georgian commuting habits in the long-term?

There is certainly a spatial fracture in Georgia, but it is not necessarily more acute than in other countries. A few studies before 2016 observe an economic fracture, though it is largely explained by the difference in degree of urbanization across regions; spatial clustering by region does not yield surprising results either. Even if poor data implies that the results obtained from these studies must be interpreted with caution, the evidence is not surprising: Tbilisi is economically better off than other parts of the country.

More recently (April 2020), a German Economic Team, in collaboration with ISET, analyzed income distribution and poverty in Georgia. Their conclusion was the same, but with a twist: Tbilisi still has the highest GDP per capita in Georgia, however, it also has the slowest growth rate in the country, and other regions are catching up.

Of course, not all is economics related. Regarding the second question, for example, the relative importance of COVID-related factors (such as those listed above) from the Georgian public perception is not yet known. As for the scope for employment, subnational competitiveness will be key. In a recent study, the World Bank (2020) identifies “secondary nodes of economic activity outside Tbilisi”, which certainly play an important role in attracting people who would possibly prefer to settle in these nodes.

Yet how all these factors will combine to slow, accelerate, or even reverse general migration to the capital is still difficult to assess.

Whatever may determine the attraction of a particular place for businesses and people relies not solely on economic opportunities. Other factors, such as how connected, rich, stimulating, comfortable, or in other words, how ‘livable’ the environment is, play a significant role in our perception of well-being and quality of life. Thus, tracking indicators of livability could offer a better understanding of the hidden constraints of settling outside Tbilisi, even with good internet access. Indicators of livability can become a catalyst for change at the local level. Its pillars would be health, environment, culture, education, and gender bias, amongst other things. They would certainly determine whether the spatial fracture in

Georgia will at least partially heal, while also determining the flow of migration to Tbilisi.

Ultimately, it is a subject worth studying: we all have colleagues who have decided to stay away from Tbilisi during the pandemic and work from another place. Those I know seemed to have enjoyed it and sometimes even come back for a visit.