Could Peace Be Controversial? 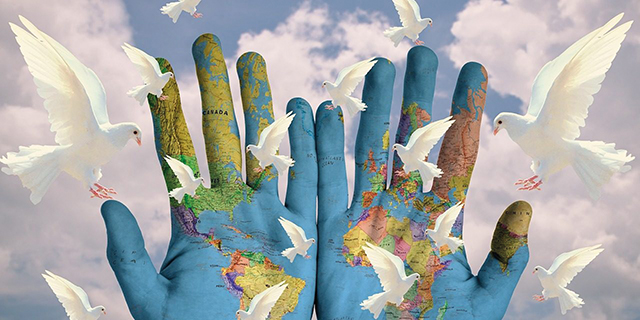 Peace has lately become a subject of controversy in Georgia, with the risk of another military surprise seeming quite real. The feeling is maturing that the current idyllic modus vivendi, with our people happily involved in their everyday routines, casually running their errands, nonchalantly strolling their babies in spring-stricken parks, idly driving their beloved cars and cheerfully shopping around, might in a split second become what we are seeing today in the exhausted and beleaguered Ukraine. Nonetheless, there persists a heated debate on whether Georgia must openly and directly be involved in the Russian-Ukrainian clash or should rather steer clear of the conflict so that the onrushing Russian military have no intent or desire to stage the same mayhem here as it has done in Ukraine. And most interestingly, the controversy has spread throughout society from a limited circle of politicians.

I thought we were living in the 21st century when the content of human ideals, like courage, audacity, valor and heroism, changed their shade and content, having acquired a clearly special meaning that is miles from the foolhardiness and futility characteristic to past times. These elevated human qualities must in the first place serve the general public comfort and happiness. It is hardly understandable that peace might have an alternative, especially for a nation like Georgia, which has in the last couple of decades lived through several wars imposed on us due to our inability to judge history and master its tragic lessons. We all know very well what is good and what is bad when it comes to making choices, and we all have a sharp enough olfactory faculty to feel the contours of our future, but there are certain insurmountable circumstances that keep us from enjoying the ideal standard of living that we have been toying with the last thirty years.

The entire world knows that the best is being done by the government to keep the country balanced on the golden median. Yet, there are certain public and political forces in the country whose vested interest lays in something absolutely contrary. For them, undermining peace has become the only available vehicle to push forward their political agenda, seeing them strongly contemplating a plan that might be brought to life not just via legal electoral efforts. Frankly, this is all déjà vu. The enthusiasts of trading peace for war are doing all they can to make the most of the strained moment and give new flow to troubled waters, within which fishing will definitely become easier for them. This is the verge where peace per se becomes controversial: where the government is telling us to be extremely careful not to upset the applecart, they are trumpeting the contrary – let us make enough waves to do just that, because our current leadership has to look ‘stronger and braver’ in the eyes of the world, calling us to get engrossed in the Russian-Ukrainian belligerency.

The already well-weathered-in-wars Georgian people are finally managing to sustain peace and calm in the land, though doing so in painful fits and starts, because keeping balance between the western idea of development and the ever-present Russian military threat is a very complicated political act to perform, as is staying on the crest of the all-engulfing wave of the current geopolitical shakes and alterations. Georgia wishes well to any nation of the world that is taking unbearable pains to survive, including the friendly Ukrainian people, but we also need to somehow keep up the peace here, and this may only happen by holding a tight and steadfast grip on every occurring chance to remain in political equilibrium among the players of the brutal military and political game that the world is involved in. As the bitter history of our recent fights well proves, keeping peace is much more difficult than making war, and if this is true, should we ever risk acting otherwise?