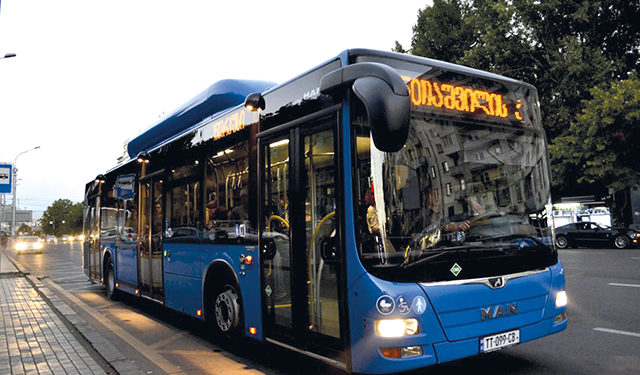 During the week, the epidemiological situation in Georgia has been relatively stable, with the daily number of new coronavirus cases significantly decreasing. The above improvement led to the government’s decision to ease certain restrictions earlier than planned.
From February 8, municipal transport (metro, buses and minibuses), and public markets and fairs, will open countrywide. Intercity transport, however, will remain limited to taxi and private car.
From February 15, the education process will be resumed in the classrooms in Tbilisi, Rustavi, and Kutaisi, just two weeks behind the same allowance throughout the rest of the country. The same day, outdoor catering establishments will be allowed to reopen to sit-out customers.

Tightening the Rules
Notably, in parallel with easing restrictions on the coronavirus pandemic, the government plans to tighten the rules. As such, in case of repeated violation of the rule of wearing a face mask, the fine will be doubled. Based on the current regulations, a person is fined 20 GEL for not wearing a face mask. When doubled, the fine will amount to 40 GEL.
The PM noted that tightening the rules “Should reveal the responsibility of each citizen and organization.”

The Protests
Prior to Thursday’s government announcement on lifting some restrictions two or three weeks earlier than planned, the Gastronomic Association of Georgia published a public post saying that on Saturday, February 6, some 200 restaurants will resume operations despite the still-imposed COVID restrictions. Levan Qoqiashvili, the founder board director of the Association, wrote of the decision on Facebook.
“Unfortunately, the expectations of the hospitality industry were not met; instead of finding a reasonable solution, the meeting with the government officials was postponed and then did not take place. Since we do not see any other solution, despite persistent efforts, we decided to open restaurants on February 6th. We fully understand all aspects of our determination and it is not easy for us to make such a decision,” Qoqiashvili wrote.
For two months, from November 28, restaurants across Georgia have only been able to work through “delivery service”, with hosting a guest on the spot resulting in a fine of 10,000 GEL. From February 1 (except weekends) Batumi restaurants have been allowed to host guests in open spaces, but not restaurants elsewhere in the country.
On Wednesday, Georgia’s Economy Minister Natia Turnava warned restaurant owners that the illicit openings planned for February 6 will be countered with a harsh government response.
“Our Ministry has been blamed for lack of communication, which is not the case. We communicate on an almost daily basis with representatives of the hospitality sector, including restaurant owners. Because restaurants cannot be opened in other parts of Georgia except Adjara, it is understandable that many are dissatisfied. But this is no excuse for breaching the law and disregarding the epidemiological situation in the country. If the restaurants defy the rules and reopen on February 6, the government’s response will be harsh,” she said.
Following Thursday’s announcement allowing restaurants with open-air spaces to serve sit-out customers from February 15, we await updates from the Gastronomic Association of Georgia as to whether Saturday’s protest “opening” will go ahead.