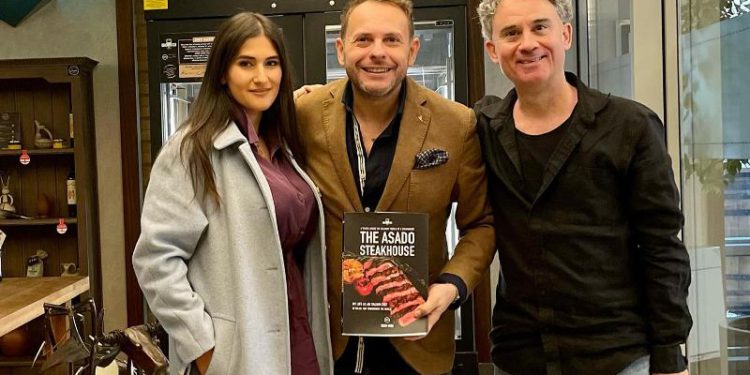 Anyone who knows Georgia-based Italian Chef Enzo Neri, the Brand Chef of DineHall for Maqro Group, and of the Mercure Hotel Old Town and Ibis Styles, knows he is never short of energy, motivation and new ideas. He has already done much in his time here in Georgia to develop culinary awareness and add his own touch of magic to numerous kitchens. Stuck inside, just like the rest of us these curfew evenings, he let no time go to waste, and tasked himself the challenge of creating a new steak-based cookbook.
With the book set for release at the end of March, GEORGIA TODAY asked him to tell us more.

How did you end up in Tbilisi?
Riccardo Massi, a good friend from my hometown, has been coming to Georgia repeatedly since his childhood. I remember ‘Richi’ talking a lot about this country, highlighting the unique cuisine and the extraordinary wine. He would also often talk at length about the popular orange or amber wine made in special amphora called qvevri, and about his long-time Georgian friend, Gia Piradashvili, owner of Chateau Mere, a stone castle hotel located in the historical province of Kakheti. Richi tried to persuade me to visit Georgia millions of times, all to no avail. Then one day, Gia messaged me on Facebook and invited me to come to his Chateau Mere and teach a high-level cooking masterclass. So, in the summer of 2015, I flew from New York to Tbilisi, the capital city of Georgia.

What inspired you to stay?
The charm of the city captured me. I have been living for the last 20 years in big cities like London, New York and Dubai, and Tbilisi looked much more like a city on a human scale. I found the culture very interesting, especially the one related to food and wine. Also, I thought it was a new up-and-coming market, and with my international experience, I could help the hospitality business to grow. I have been doing consulting and building new concepts since 2017. In fact, Asado Steakhouse is the latest.

Tell us how Asado Steakhouse came about. Why steak in Georgia?
Since January 2020, I have been part of the Maqro Tourism project under the title of Brand Chef. When in June, Mr Erdogan Sahin, the GM of the hotel but also the person in charge of the hospitality sector of the Maqro company, asked me what I could do inside the hotel restaurant, I replied that I had an idea that might work. Having lived in Georgia for four years, thinking of Georgians as recognized as being great meat lovers, and having worked in cities like New York and London, I had the idea of creating a concept focused on meat. Also knowing that, in Georgian tradition, there was no custom of eating grilled steaks that were previously subjected to the dry aging procedure, I realized that my new concept would work.

The main restaurant of the hotel seemed little more than a breakfast space for hotel guests, but with a nice adjacent patio, not so wide but all along the restaurant. With great surprise, almost by fate, I realized that there was a kitchen area used for grilling with the beauty of a Josper Oven. My GM liked the idea, and so we started working on it. We had the kitchen, the Josper, the lounge and the patio. A dry ager and heating lamps were needed on the Josper’s kitchen pass. I started developing the recipes, we did some research online, and we put together our synergies to get a new product on the market. I based the recipes not only on the idea of an Argentine steakhouse, but also on some dishes that were part of my culinary journey. 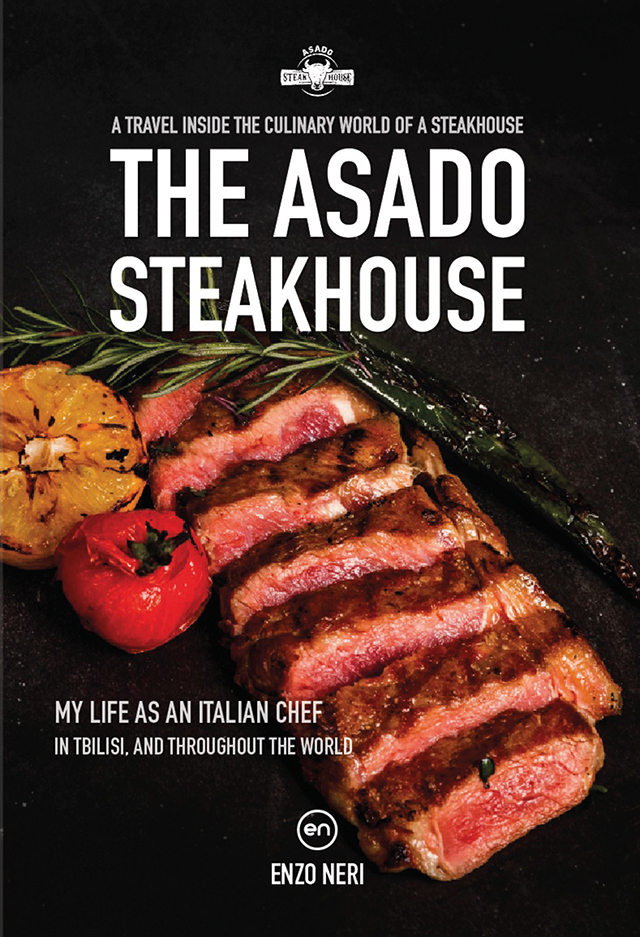 Why this cook book and why now?
The Asado Cookbook takes both its title and its form from the concept of the Asado Steakhouse restaurant, a concept I developed for the Mercure Hotel Tbilisi. This pandemic time restricted my lifestyle, and being a ‘full of energy’ person, I had to find something to work on. I also knew that I’d achieved a lot when it comes to restaurant and concept development, and I needed a new challenge.

The idea of writing a book had been with to me for a while, but I didn’t want to make a classic recipe book of Italian cuisine, which is now highly exploited in every sense; I wanted to do something that went a little out of the ordinary and had to do with what I was working on. One of those days of the pandemic, I was at home quite frustrated that I was unable to get out. The rules were clear, curfew after 9 in the evening until 5 in the morning. What to do? A film and a few pages of a book to read alternating the various messages that we dribbled between friends. Almost as a joke, I told Nick, with whom I was in virtual contact on a daily basis, my idea of writing a book. He didn’t hesitate to encourage me, and at the beginning of January I began to write down some life stories, the description of Asado, and the recipes.

What international and local influences can readers expect?
It is a recipe book, to be sure; but it also is about the past 20 years of my life, working in and around restaurants throughout the world. It is also a book steak, from the raw meat, to the tools used, to technical descriptions of some of the professional equipment needed for preparing it. Many of the recipes in this book are featured in our Asado Steakhouse menu. Asado’s menu is quite simple. It does not pretend to teach anyone about cooking. It contains a series of dishes suited to a steakhouse, along with some personal culinary choices from places where I have worked around the world. It also contains a few dishes I would order, when I have the chance to sit on the other side of the kitchen.

Who do you expect your readership to be, and where can we grab a copy?
When I posted on social media that my first book was going to be published, I was surprised how many people around the world, from childhood friends and ex colleagues to regular customers in the various restaurants I have worked, asked me where to buy a copy.
Even a lot of people here in Georgia were texting me or adding a comment under my post to find out the date of release and where to find it in the stores.

I guess the readership will be friends, customers, old and new, foodie people, the new generation of chefs, and people who are also curious about a chef’s life.

Between my regular guests, I have made few friends and in particular an American couple from the American Embassy whom are going to be relocated soon. Cindy and Paul reserved three copies already. It is such a nice, rewarding feeling. 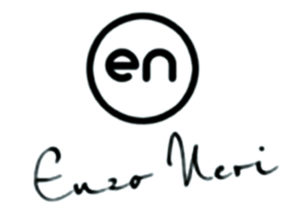