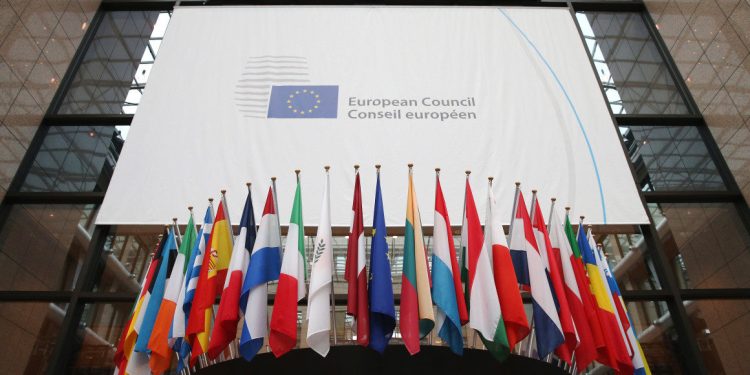 BRUSSELS, BELGIUM - FEBRUARY 18: Flags of the European Union member states hang inside the Council of the European Union's Lex building on February 18, 2016 in Brussels, Belgium. Most of Europe's 28 member state leaders are gathering in Brussels to take part in a crucial summit and vote on British Prime Minister David Cameron's pledge to renegotiate the terms of Britain's membership in the EU, namely proposals to limit benefits for migrant workers. A referendum on whether Great Britain will stay in or leave the European Union is to be held before the end of 2017, though many expect it to take place in June this year. (Photo by Dan Kitwood/Getty Images)

Although Bernard stressed that they are “closely” following Gvaramia’s case both directly and via the EU Delegation in Georgia, the letter made no mention of calls for the President of the European Council to talk with Zurabishvili about the matter.

Bernard stated that “questions have been raised, including from the Public Defender, about the Court’s reasoning in Mr. Gvaramia’s case, both in terms of conviction and sentencing,” while emphasizing that the EU does not comment on the merits of specific cases.

“Fundamental rights and due legal process need to be respected, with transparent and fair judicial rulings, in line with the rule of law, and international commitments, including the European Convention on Human Rights,” Bernard highlighted.

As one of the “cornerstones” of the April 19 agreement and the newly approved EU-Georgia Association Agenda, he also drew attention to the fact that the EU has “repeatedly called” on Georgian authorities to “engage in an inclusive and comprehensive reform of the judiciary.”

Bernard also mentioned that in order for Georgia to be granted EU candidate status, the European Commission has recommended that it make “stronger efforts to guarantee a free, professional, pluralistic, and independent media environment, notably by ensuring that criminal proceedings against media owners comply with the highest legal standards.”

The EU, he emphasized, “will continue to follow closely the developments and the wider justice reform and stands ready to support all meaningful efforts to implement the needed reforms in order to live up to the European aspirations of its citizens.”