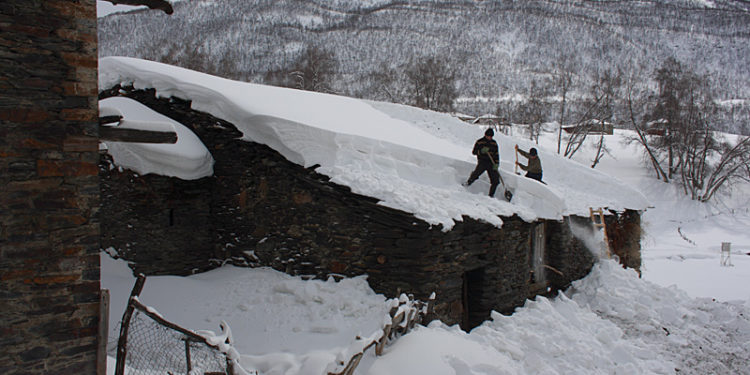 (But this article is actually more about shovels than spades. However, try and find a famous quote about a shovel? So, call a shovel a shovel. It’s the flat-ended one, not the one with the pointed end).

Generally, here, one buys a shovel (OR a spade, hoe, rake, etc.) minus the handle. The assumption is that one will know which wood to use and how to make the handle oneself. When surrounded by forest as we are, and also surrounded by knowledgeable neighbors, the thing can be made and fixed in place without too much trouble. The handle must be hard, dense, able to take the strains put on it by your work. Not liable to rot. There are woods, and woods.

The implement is hugely important in a place like Upper Svaneti, where a long and snowy winter is a typical feature of the seasonal year. This year notwithstanding; although the snow is certainly making its entrance in grand style now, at long overdue last. You will have plenty of snow to remove from your steps, path, driveway and so on. If this is all, you are blessed not to have also to take it off your roof, generally a far larger surface than all the others together. But if you are supposed to shovel your roof, and don’t, you can actually lose it from the accumulation of all that soft, fluffy weight! A cubic meter of fresh snow can weigh from 160 kg up, getting heavier as it is compacted over time by its own weight. More snow falls, pressing that under it down, making it denser in the same volume.

Now, there are several major frustrations in shoveling snow, along with some joys. The former include when it is sticky enough not to go flying off when you swing! Then you must bang the shovel against a hard surface to dislodge the snow, and you’ve lost all the energy of the swing in useless effort. 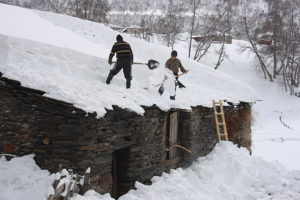 If your shovel, on the other hand, wasn’t fixed well enough, and eventually joins the snow in flying away, then you must re-fix it, better this time. Try using screws instead of mere nails! Also, it must be a tight fit, not a wobbly one.

Getting a damaged edge can really hurt the quality of your work. This might happen if you hit something unyieldingly hard, which warps the steel. Then you have to hammer it back into thin straightness. Your handle can break if you put too much force on it, and you have to replace it. I’ve only once had the steel shovel itself break, from attempting to move snow which was more ice. It didn’t crack right across its width, though, just in the middle. So, for a while it will still be useable.

Gloves will help to prevent blisters on hands not used to this work. Very important!

If the snow is of the type which crumbles into powder when your shovel bites into it, you can lose much of the load which you expected to get. This is usually a factor of lower temperatures than the near-freezing ones which make the snow sticky. All you can do is accept this limitation, lower your expectations, and continue.

Wear too much clothing, and you’ll sweat a lot with the work. Just enough, and you’ll stay warm but not overheat. Sweating can lead to getting a chill when you cool down. Prolonged shoveling even in considerable cold can generate quite a lot of body heat.

What are the joys of shoveling, then? One is simply the absence of all the above problems, with nice neat blocks of snow going where you send them. Another is the good physical workout you get, helping you stay fit. Heart, arms, chest, back, legs, hands and fingers. And there’s the pleasure of a job well done, aesthetically and with the knowledge that you have performed something useful and necessary.

Keep the spade for digging into soil, in other seasons. 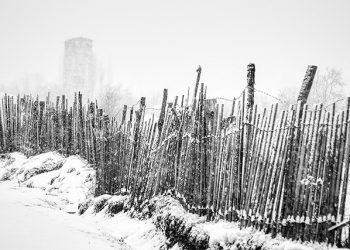 Ghost of a Chance 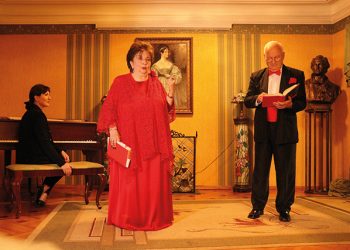