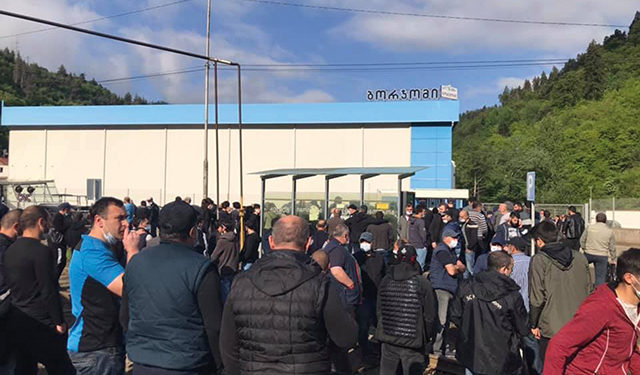 Up to 350 workers of the Borjomi Mineral Water Bottling Factories No 1 and 2 went on strike on May 18. Prior to this, there was a 21-day mediation between the company, employees and Trade Union of Agriculture, Trade and Industry, which ended without an agreement, after which the employees went on a legal strike. They say they are fighting for decent working conditions, their main demands being a salary increase, the right to rest and have breaks, and better working conditions in general.

Employer company ‘IDS Borjomi Georgia’ released a statement regarding the strike of its employees, saying that even during the pandemic, 100% of the employees were retained and the salary fund was increased by 10%. However, the company added, while they are ready to consider increasing salaries again, the demand of the striking employees is a 50% increase, which is why no agreement had been reached.

The organizer of the strike is the Trade Union of Agriculture, Trade and Industry, which fully shares the strikers’ demands and complaints.

Police are mobilized outside the Borjomi factory to prevent any incidents.

On May 19, Acting Mayor of Borjomi Davit Zaalishvili arrived at the rally being held outside the factory and announced his intention to meet with their employer.

The next day, the striking employees of Borjomi Mineral Water Bottling Factories No 1 and 2 held a protest march, which was also joined by the local population.

“The company is not communicating with its striking employees. No negotiations have taken place between the company and the employees. They wanted the talks to happen without the involvement of the trade unions, but the strikers do not agree. We are continuing the protest today and will continue until the demands of the employees are met,” Giorgi Diasamidze, Chairman of the Trade Union of Agriculture, Trade and Industry, told BM.ge.

“During the two days of the strike, the company discriminated against employees through direct intimidation and threats from the administration for participating in a legal strike and appearing on television,” the trade union claimed.

IDS Borjomi Georgia notes that as a result of the strike on Wednesday, the company temporarily suspended the work of both factories. The administration explains that the company is fully prepared to resume the work of the factories at any time.

“In recent days, a significant number of employees have continued to work and are still willing to do so, but the illegal blocking of trucks and other vehicles by a number of strikers poses a serious threat to our employees, transport company owners and the strikers themselves,” they said.