Between A Rock And A Hard Place: Alternatives To Partnership For Georgia And Ukraine 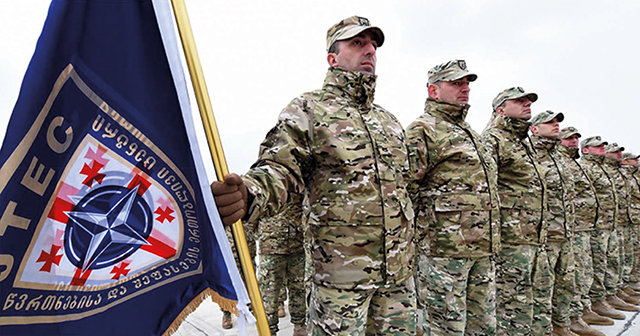 The prospect of NATO membership has been a long-sought after goal for many aspiring nations, particularly Ukraine and Georgia. With its immense national security, economic, and political benefits, the ascent to such an organization would pay dividends for the small embattled nations still facing down the Russian bear. However, in addition to this hurdle, both nations have faced internal social and political strife that further distances the prospect of membership.

Finding a form of middle ground between isolation and NATO integration may become an interim solution for the two. As Poland, Ukraine, and the UK are in the process of entering into a prospective agreement, it is not outside the realm of supposition and possibility that an alliance of the “buffer states” could be beneficial for both its members and NATO and the West. Acting as both a physical and political intermediary, this could also act to deter unnecessary conflict through its own agreements with both NATO and Russia, or its CSTO.

While this idea of being a mediator is good in practice and in the charter of such an organization, it can be surmised that NATO is more likely to warm up to the new alliance than Russia. However, this is not to say that adding a third party may encourage the Kremlin to take a more reasonable stance in its regional relations. As current geopolitics stand at the time of writing, the new alliance may turn into a type of “feeder” organization for NATO, given the leanings of the proposed members.

In examining the new UK-Poland-Ukraine alliance, this serves as a potential template. Developing both trilateral trade and European security, it also serves as a platform for combined defense for Ukraine in the face of NATO’s hesitancy to make affirmative moves for their eastern neighbor. Ukrainian Foreign Minister Dmytro Kuleba framed its mission given the current state of regional affairs by stating, “We cannot expect safety and prosperity somewhere in the future when we become members of the EU and NATO. We need them today.”

This raises the matter of what the composition of this extra-NATO alliance would be. Georgia, Ukraine, and Moldova would most assuredly be keystone partners in its founding. Adding to this number could be the Baltic States, bringing in a northern component to the alliance. Together, these are all tied through unified preservation of European unity, seamless trade policy, and combined multiregional defense.

Including this mixture of existing NATO members and NATO aspirants lends itself to becoming a type of “feeder organization.” Not unlike some clubs or schools being feeders to larger or more prominent universities, this could act as a proverbial “purgatory” before elevating to the lofty heights of full NATO membership. This mechanism would, however, dissolve its credibility as being the aforementioned mediator between NATO and Russia’s CSTO.

The unity of these three nations, sharing the pain and tragedy of Russian abuse, creates an atmosphere of hope for their peoples. Moldova since 1992, Georgia since 2008, and Ukraine since 2014, also need material, diplomatic, economic, and military support from NATO and the collective West. This organized alliance creates the avenues for that assistance to be channeled in an organized and significant way. In combination, it also allows the otherwise small and easily overlooked nations a larger voice at the table with other larger powers.

By creating this formal connection between NATO and this alliance, the “Black Sea Coalition,” as a working title, also acts as a counter balance to the hefty weight Russia throws around in the region. Additionally, this extends out of the Black Sea to the Eastern Mediterranean where Russia continues to support the oppressive regime of their latest puppet, Bashar al-Assad. To the East, having this link to Central Asia works as a furtherance of technological and economic development connections with the West.

Poland has pioneered this model, particularly in the words of their Prime Minister, Mateusz Morawiecki. In speaking with his Ukrainian and UK counterparts, he outlines clearly the strife nations like his deal with, saying, “Living close to a neighbor like Russia, we have the feeling of living at the foot of a volcano.”

Other diplomats of Eastern European nations have echoed this sentiment, displaying the troubles when living within the crosshairs of Putin.

A recent roundtable discussion hosted by the Georgian Institute of Politics covered the role of Georgia within this context. With notable participants such as Nona Mamulashvili and Elene Khoshtaria, the topic of Georgian cooperation with Ukraine and Moldova, given that NATO aspirations seem distant in the political scope, was discussed. Professor Stephen Jones, an expert in Russian and Eurasian studies, expressed a similar sentiment in that Ukraine’s future in regards to Russia is interlinked with Georgia’s relationship with the same. The prospect of EU and NATO membership for Georgia is something Putin cannot accept, and as a result will do everything to prevent from becoming a reality.

Jones noted that while the West has not been a supremely great ally to Georgia in the past, it is the best chance for socio-political advancement. Georgia is already the only country in the Caucasian region that has any real democratic model in place. In fact, Professor Jones explains that the strongest foreign policy weapon Georgia can wield against the Kremlin is the pursuit of Western model democracy, not only for the betterment of its citizens, but for its own national security interests.

As a result of this, in the larger picture, Ukraine and Georgia’s respective sovereignties are tied to the same dependencies: democracy and Western integration. Uniting these nations, along with Moldova, brings these combined interests under one formal label, strengthens political and economic ties, and establishes concrete defense corridors in the contested Black Sea region. If NATO membership is outside the realm of short-term reality, then an interim alliance can only help to elevate and encourage these nations to fulfill membership requirements as well as advancing domestic and foreign policy for the countries involved.