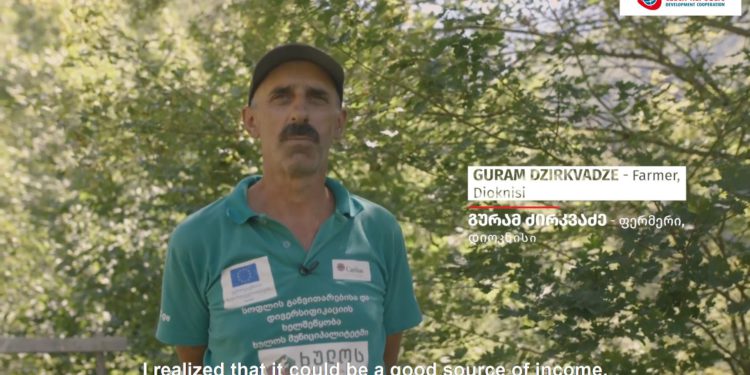 In the high-mountain village of Dioknisi in Khulo, people have cultivated potatoes for years, but one farmer, Guram Dzirkvadze, a self-taught agronomist, has completely changed the Dioknisi villagers’ view on agriculture, managing to convince them that cultivating raspberries would be a much more lucrative and easier affair than cultivating potatoes. The enterprise has been a resounding success, with Guram himself becoming The Man to Know and consult on these matters in the entire Adjarian region; a farmer who sees the agricultural development of Dioknisi village in the field of berry, stone fruit and viticulture.

“Adjara is a land-starved region,” he tells us. “Potatoes are sown in wide fields, where each resident has a land area of 2000 – 2500 square meters. Therefore, it makes no sense to cultivate potatoes here. At the same time, it’s a cheap product, it cracks the soil, and it needs frequent irrigation. The raspberry and blackberry orchards give a rich harvest even in a small area, they do not crack the land and they help the bees. ”

Today, raspberry has already been cultivated on three hectares, and the business has connected many families in the village. The berries also gave them profit. Dzirkvadze’s future goal is to create an unfertilized organic raspberry farm in the village, the product of which will enter the EU market in addition to the Georgian market.

“For three years now, I’ve been picking raspberries several times per season, including in December,” he says. “We don’t use any fertilizer; nature and the climate bring such a quality product. We had no idea these berries would ‘like’ this place so much. When I first planted raspberry, everyone was surprised, but in the first year, I realized that it was possible and would be a good source of income. This culture has radically changed the future of agricultural development in our region; here, potato planting has now been almost totally replaced by this. The difference between income and profit is huge, 15 times more profit. First, the cost is almost zero: it is planted once, and after that we need no nitrogen and as I said, no fertilizer. You do not need to sow, you do not worry about anything, and the demand for the product is huge.”

The whole village is involved, and we are told there is interest from neighboring communities as well.

I realized that if only I had raspberries, and it would not spread and expand, it would make no sense. Therefore, we also worked on saplings. We brought 15,000 saplings and distributed them at half price. In our village alone there are intensive orchards (up to 3-4 hectares), although saplings have been taken to other villages too. I’m sure that in a few years, my village will become the “center of raspberries”.

Why shouldn’t they be? The source of their income has increased; women, family members are employed, including kindergarten teachers and a number of people of different professions. They pick it, hand it over in the evening, and I take it to the market in Batumi. This year, we were able to produce 20-25 tons of raspberries in three seasons. With the help of the Czech Development Agency, we bought a refrigerated van, and we already transport the product to the market at a lower price. This is a big leap for us. I therefore thank the Czech Republic, the Embassy and the European Union.

Besides raspberries, you also have grapes, don’t you?

“Yes, we have a total of 10-12 varieties of table grapes. We have exemplary grape plots, and provide information on how table grapes can be developed. Among the varieties, we have Saba’s Pearl, Black Magic, Prima, and Italy. Therefore, I have grapes to bring to the market until the end of September. We have a plum orchard too. After setting up the orchard, I bought 40 apple and pear seedlings at the market. Then I asked for co-financing to add different varieties of plums and pears to the orchard. We also have local old varieties. We collected these crops all together and are still looking for old, good varieties. I hope that after seeing this fruit, people will be interested in them.”

For the Dzirkvadze family, it is important not only to produce, but also to change the local lifestyle and empower the economic situation of the local population. It is said that based on the support from the European Union, the population have at last been convinced that they can be employed in their own country and still earn a decent income.

“We already have a trend that young people want to study in the field of agriculture; that after gaining knowledge, the experienced ones return to their land. This makes me happy, because it will strengthen the village, and a strong village is a strong city and country,” notes the farmer extraordinaire.