An Examination of War Propaganda from the Kremlin Perspective 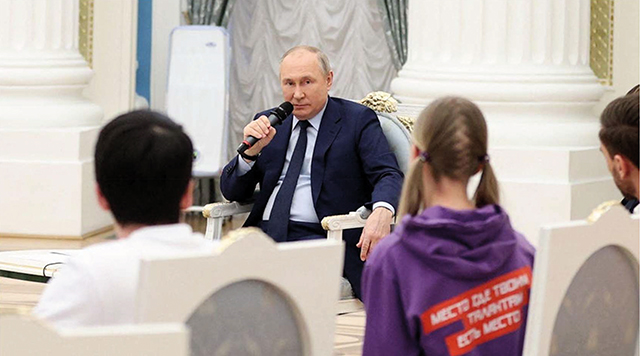 Russian President Vladimir Putin during a meeting with a panel of young Russians. Source: Sputnik/AFP Via Getty Images

The term “drinking the Kool-aid” is an allegory to the Jonestown Massacre, but generally refers to any group or individual that is so devout in a belief that they will die for their cause. This belief is typically something that is false, or which attempts to obfuscate the truth. For many observers and analysts, this has become synonymous with people who firmly believe the Kremlin’s narrative of its “special military operation” in Ukraine.

The “denazification” of the country and, to a lesser extent, the fight against the “perverse values of the West,” lies at the core of Russian President Vlaidimir Putin’s causus belli. Ukraine has been painted as vile, aggressive, and fascist by Russian state-owned media and the legion of social media accounts that parrot the Kremlin lines.

The war has been framed as an inevitable but just cause that is righteous and good as a cleansing of what is “Russian land” anyways. To better understand this, it must be viewed through the Kremlin’s eyes.

The reader should note that the following is written from the perspective of Russia and is based on reports, articles, and posts from pro-war Russian sources.
Ukraine is, has been, and ought always to be a part of the Russo-Slavic brotherhood. It is the jewel of the empire and the breadbasket of the Slavic world. The goal and glorious cause is to cut NATO’s puppeteer strings on Kyiv and liberate the Ukrainian people. This is evident in the harsh criminal penalties in Russia for referring to the war as anything other than a special military operation, and the capture of towns and cities as anything other than a liberation.

Even Georgia saw this. The 2008 intervention came as a result of American and broadly Western imperialism into Russia’s sphere. With the West’s imperialistic ventures into Iraq and Afghanistan, the Kremlin would not stand by and allow this intrusion into the South Caucasus, still a part of the great empire. No, the justified intervention of a peacekeeping force was required. They had to step in and halt the movement of Georgia Westward, check the ambitions of Tbilisi, and preserve the place of the Osstian people in the Russian world.

After all, where would Georgia be without the Russian empire and later the Moscow-led Soviet Union? The country would still be an agrarian backwater, with little to no industrialization, and no significant investment or development. Following the work of the Motherland, and the fall of communism, they ran to the West, the opponent for so many decades.

Next, the West targeted Ukraine. The coup against the legitimate government in Kyiv, likely orchestrated by the CIA, in 2014, was another transgression by America and its European partners. It was only when the armed groups of the Donbas region stood up against this that changes could be made. However, for their outspoken stance, the people of these regions were shelled in their homes, at school, and at their workplaces.

As such, it is the job of Russia, once again, to fight the fascist invader. This has always been the mission of the Russian people. After all, there would have been no timely end to WWII without the Red Army. And even prior to this Great Patriotic War, Russia had been under the boot of almost every major empire in history. Napoleon’s France, Ottoman Turkey, Imperial Japan, The Kaiser’s Germany, internal fighting against the Tsarists, and finally Hitler’s Germany all ravaged the Russian world.

And it is this final struggle against the predations of Nazi Germany that defined the path forward for Russia. Russia, and the Soviet Union as a whole, contributed more towards the ultimate victory in Berlin than any other country in the Alliance combined. The Soviet citizenry suffered more than any other country under Nazi occupation and, as such, the raising of the Victory Banner over the Reichstag on April 30, 1945, is one of the single proudest moments for the country.

So, today, it is the same fight, but with different faces. Kyiv facilitates the armament of groups like Right Sector, Svoboda, and infamously the Azov Regiment, who promulgate fascist and Neo-Nazi ideologies. This facilitation is encouraged by its Western allies and NATO. In order to avoid another great suffering of the Russian people, a ‘denazification’ is not only warranted but required for national preservation and Russian sovereignty.

And thus it is: The Russian perspective that justifies a war in Ukraine. The intricate ties to Russia’s history, along with its slight Kremlin-produced adjustments, are deep rooted and tethered to its national identity. This identity is also mirrored in its reporting of the war.

Anyone, from the casual observer to the full-time analyst who peruses pro-Russian news and social media, is aware of the popular line “everything is proceeding according to plan.” This has been the cornerstone of almost all formal and informal reports that come from the Kremlin, its media outlets, and pro-Putin military bloggers alike. The facade being posted for all to see that the special military operation is a success, with Ukrainian “gangs” and “militants,” as they’re often referred to as, being forced back at every opportunity.

This is particularly telling in the media being released to the public. High quality, sixteen-by-nine, video of artillery firing salvos, infantry shooting into buildings (albeit seemingly empty), and fighter jets releasing munitions off towards unseen targets are the most common. These show units at the highest readiness capability, wearing the latest in combat webbing and kit, and all displayed taking offensive action.

Perpendicular to the official videos, open-source clips shot by the soldiers themselves paint another picture. Antiquated kit, rusted or outdated weaponry, and a glaringly urgent morale and supply problem permeate the majority of Russian military formations. This, topped with the multiple retreats by the military, termed as ‘strategic regroupings’, has undermined much of the Kremlin’s narrative.

Interestingly, as a result of these regroupings, many of the pro-Russian accounts online have begun to pivot their narrative as a result of this. From what was a tonal undercurrent of advancing towards key cities and seizing ground, this tone has shifted to one of defensive positioning. The action is no longer described as victories, but rather as a defense against the onslaught of the “Ukro-fascits” and the West. It is no longer an invasion, but rather an attack by Kyiv on Russia.

These online hubs, particularly in places such as VKontakt, OK.ru, and Telegram are the largest culprits for this veneer of propaganda. With little to no oversight, pro-Russian channels are able to share information that is so far from reality, it bends the mind of any Western reader. The production of ‘dirty bombs’ by Kyiv’s scientists, the assertion that Ukraine has no air defense, and the Russian Air Force moves unobstructed in the skies over western Ukraine, and the ‘fact’ that NATO is about to begin fighting internally are only some of these absurd claims.

This circles back to the Russian perspective and their history of invasions. It is essential to the narrative, and a core component of driving support for a war that now cannot be won. As so many of the people are poised since youth to believe the word of the Kremlin and its press network, it is easy to see how much of the country can continue their support. However, Russia cannot continue this charade forever. At some point in the near future, the harsh reality will have to be revealed, and a popular fallout will most assuredly ensue. Perhaps, in a backwards way, everything does indeed “proceed according to plan.”