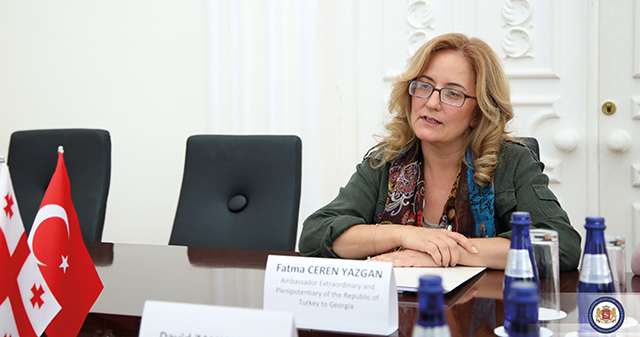 GEORGIA TODAY spoke with Ambassador of Turkey to Georgia, Fatma Ceren Yazgan to discuss Turkish-Georgia trade relations and future prospects for those relations.

How long has Turkey been “doing business” with and investing in Georgia? Can you name any key moments in relations?
Turkey and Georgia signed the Protocol for establishing diplomatic relations 30 years ago following the collapse of the USSR. Business ties in the form of investment and trade began right after the opening of the Sarpi Border Gate in 1989. Due to the geographical proximity and complementary supply and demand flows, trade developed organically. Of course, the presence of groups of people on each side of the border who had family ties and common ethnic roots helped these relations to flourish very quickly.

One of the first major Turkish investments was in the industrial production of glassware by Sisecam in Ksani Factory. That was followed by communications technology known as Geocell, which was later sold. In tourism, the investments began in Batumi, and in the last decade we have seen them developing in Tbilisi.

Tbilisi and Batumi Airports, which were built and are operated by TAV, have also been important milestones in demonstrating the trust of Turkish investors in Georgia. In the recent decade, we have seen textile producers from Turkey moving a number of investments to Georgia. And last but not least, in the energy sector, one of the first new HES in contemporary Georgia built by foreign investment is Paravani and belongs to the Turkish Anadolu Group. The joint projects bring Georgia, Azerbaijan and Turkey together. Multinational corporate business in regional connectivity and energy transition should also be mentioned. BTC, TANAP, and BTK are pioneering projects.

Georgia imported $1.41 billion of goods from Turkey during 2020, according to the United Nations COMTRADE database on international trade. Most of that was made up of machinery, iron/steel, and plastics, though the overall list is long. How was trade affected by the pandemic? How are the challenges being overcome?
We saw a slight decline in bilateral trade volume in 2020 due to the pandemic. However, in 2021, the trade volume reached a record of $2.1 billion, where we have seen an increase not only in the exports from Turkey to Georgia, but also in the exports from Georgia to Turkey. We would like to see this trade volume improve with the introduction of more Turkish brands which are competitive in price and quality to the Georgian market as the purchasing power of Georgia increases.

Last year, Turkish agriculture was hard hit by devastating wildfires. In 2020, Georgia imported $21.53 mln from Turkey in edible fruits, nuts, citrus peel and melons, $18.79 mln in edible vegetables, roots and tubers, and $15.08 mln in meat and edible meat offal. How have the fires affected Turkey’s exports, and exports to Georgia in particular?
Due to the wildfires of 2021, hundreds of thousands of hectares of forests, some settlements, greenhouse areas and animals were burned. It is difficult to estimate the negative effects of the wildfires on the agricultural exports due to some other environmental and economic variables, such as climate change, drought, and increase in the prices of raw materials. There is some impact on the world economy through which, of course, Turkey and Georgia have been also affected.

We want to focus on cooperation in the field of technological products, in the service sector, and in the Georgian renewable energy sector. We attach significance to the transparent and sustainable energy security of Georgia, and also believe there is potential in tourism relations- in bringing more Turkish tourists to Georgia.

In 2020, $51.05 mln in packaged pharmaceuticals were imported into Georgia from Turkey. This year, Georgia opened its pharmaceutical market to Turkey. How did this deal come about, and what are the expectations for Turkey and for Georgia?
The Turkish pharmaceutical industry is strong and well developed. However, the health system and the regulatory rule of state in Turkey, as well as the size of the market, is considerably different from Georgia.

We welcome the decision of the Georgian government, which provides fair competition to Turkish pharmaceutical companies for certain licensing requirement, as it was done in some other countries 10 years ago. On the other hand, we believe that improving public health and the accessibility of people to more affordable medication in Georgia requires some further discussion within Georgia with multiple actors. The Turkish government and the Turkish pharmaceutical industry will be ready to share the good practices in Turkey with all interested parties in Georgia. 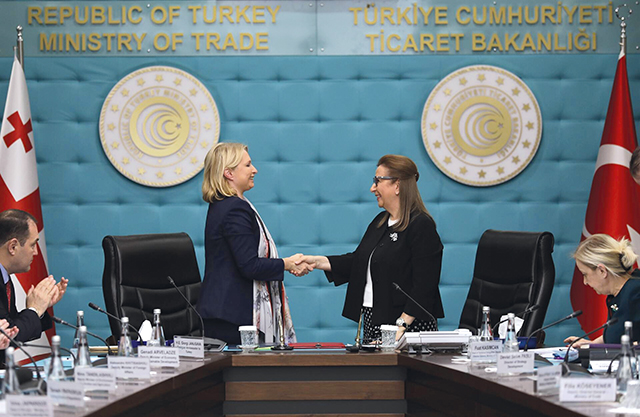 How do you see the future of the South Caucasus in the light of the emerging Armenia-Turkey rapprochement?
Turkey and Armenia started a new process following the 2020 Nagorno Karabakh War. Both countries appointed Special Representatives responsible for negotiations, and their first meeting was held on 14 January in Moscow. As it is also stated in the press release published by the Ministries of Foreign Affairs of Turkey and Armenia; the meeting was conducted in a positive and constructive atmosphere and the parties agreed to continue negotiations without preconditions, aiming at full normalization. We believe that normalization will bring positive results with a view to enhancing the economic development of the region and maintenance of peace, as well as stability.

How will the opening of a corridor through Armenian territory impact Georgia’s position?
While there is a lot of speculation raised by some circles on this issue, I would like to reiterate once more that Georgia is a strategic partner of Turkey and as we have mentioned previously, there had been a number of important regional projects that had been realized with the Georgia-Turkey-Azerbaijan partnership. We believe that simultaneous, comprehensive and inclusive development of connectivity and trade, and framing interests in a mutually beneficial way, are steps to follow for sustaining peace and stability in our region. We should not be afraid of inclusivity, dialogue, and developing new perspectives for the future.

What is the outlook and what are the aspirations regarding Turkey’s doing business with Georgia? What is being (or can be) done to boost investment and trade?
During the visit of our Deputy Trade Minister Mustafa Tuzcu in December 2021, a new protocol was signed to facilitate trade. As this protocol reveals, Turkey has agreed to allowing more Georgian exports to Turkey. Also, we would try to focus on cooperation in the field of technological products and in the service sector. Turkish companies’ interest in the Georgian renewable energy sector continues. We attach significance to the transparent and sustainable energy security of Georgia. We also believe that in tourism relations, there is a potential for increasing Turkish tourists who would enjoy nature and culture tourism. I am still surprised that the Turkish tourists in that segment have not been properly informed about Georgia’s potential. We also believe that producers in Georgia have a misperception about entry to the Turkish market. For the first time this year, we have seen Borjomi entering big retail outlets in Turkey, and again for the first time we have seen about 10% of the quota of 1 million liter Georgian wine exported to Turkey. In the same manner, we support Turkish companies to explore agricultural production for export in Georgia.