Afghanistan and the Future of Central Asia 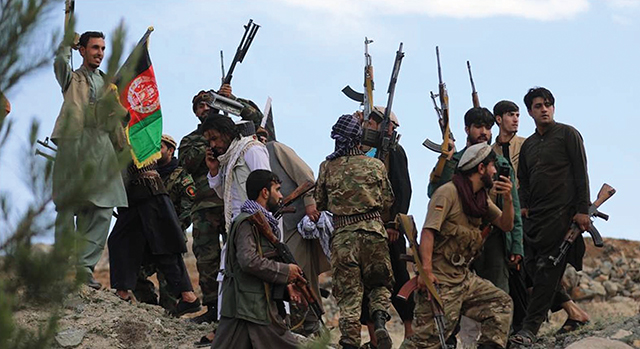 The new installation of a terrorist government, backed and befriended by enemies of the West, will only spell misfortune for the future of Western ideals. Chinese, Russian and other oppressive governments will now have free reign with the removal of a NATO presence in Central Asia.

With the withdrawal of thousands of United States and NATO soldiers from Afghanistan’s air bases, the nation’s fledgling military is left to fend for itself as Taliban militants swarm into the power vacuum that is left. Sadly, the evidence is clear that their military has not been able to stand alone without the NATO support structure. Multiple videos and images display the Afghan Army not only running or disbanding, but also surrendering to the Taliban offensive, many times being gunned down for their effort.

As NATO becomes more disinterested in the Afghan campaign, it will soon relinquish that control to not only the Taliban, but involvement from other nefarious forces, namely the Chinese. Already, Chinese dignitaries have met with Taliban “officials.” It has become uncomfortably obvious that the United States has all but abandoned the Afghan people, a people that had, until recently, experienced a period of relative peace and stability. In fact, even the military units stationed there have been uncharacteristically peaceful and calm. The last significant military casualties took place almost 18 months ago, on February 8, 2020. On that day, SFC Javier Guteirrez and SFC Antonio Rodriguez were ambushed by a rogue Afghan Army member, an attack that even the boastful Taliban has been confused about and still never claimed responsibility for. As the military citation reads:

“Both men were assigned to the 3rd Battalion, 7th Special Forces Group, out of the Eglin Air Force Base, Florida. Both soldiers were posthumously promoted to sergeant 1st class and awarded Bronze Star medals and Purple Hearts.”

In order to have a proverbial endless war, there needs to be a war in the first place. When virtually no casualties and violence reduce that to an essential peacekeeping mission, it is doubtful to label it a war in the traditional sense. With total American expenses ranging between $40 million and $45 million, it took up less than 1% of the United States’ foreign policy budget. Hardly a money pit compared to other far larger expenditures. Now, as the Taliban are given the resources of an entire nation, they will begin to resemble something NATO has more recently fought: ISIS or Daesh, the so-called Islamic State.

Some have taken measures that resemble an attempt to dignify these terrorists as governors and diplomats. The United States White House has already stated “The Taliban also need to make an assessment about what they want their role to be in the international community and [the ambassador] will make it clear that the international community will be watching closely how the Taliban behaves. They also have a range of tools in their arsenal, with which to take steps should they choose.”

The pullout confirms what I already knew, it was all for nothing. I hope people see this war for what it is, and I hope this is the wake-up call for Americans to start seriously questioning the actions of their government. – Specialist Ryan Mash, 1st Battalion, 32nd Cavalry, 101st Airborne Division, United States Army

To even the most juvenile of defense, political, and military analysts, it would seem puerile to expect the Taliban to operate as an organized political entity and not the terrorist mob they really are. Already, human rights abuses are recorded to be taking place, Afghan soldiers conned into surrendering are being shot in the street, and women are being beaten and forcibly removed from their previously attained public and private positions. Government employees that have left their posts are being called and harassed by the Taliban, which now has records of their employment and access to contact information and addresses. The situation on the inside of the nation is growing worse than anything seen during NATO control.

The West has threatened economic sanctions, as if a country that has existed on purely domestic production and poverty will suffer any consequences from nations that do little other than military support. In Afghanistan, a man and an AK series rifle can do enough to feed a family and make a living. Some politicians, particularly in the United States, have made the argument that the need for soldiers has dissolved. However, seeing a repeat of the hasty and haphazard exit from Vietnam is discouraging for many of the men and women that served in the embattled nation.

“I think that Afghanistan was the Forgotten War, and a war we never should have started to begin with,” said Specialist Ryan Mash, 1st Battalion, 32nd Cavalry, 101st Airborne Division, United States Army. “There were no goals, no end state, just a war that was designed to be sustained. Vietnam should’ve have been a lesson to all Americans, and here we are basically doing the same thing. We didn’t win, the Afghanistan war wasn’t a victory for the American people, and it sure as fuck wasn’t for Afghanis. I had already come to the conclusion years ago that we fought over there for nothing. We were fighting just to fight, in some politician’s war, for no reason at all. The pullout confirms what I already knew, it was all for nothing. I HOPE people see this war for what it is, and I hope this is the wake-up call for Americans to start seriously questioning the actions of their government.”

Now, with the abandonment of NATO weapons and vehicle stockpiles, there is plenty of weaponry to go around. Already confirmed are videos of Unmanned Aerial Vehicles (UAVs), small arms, rocket launchers, and even gym equipment being seized by the Taliban. Military Vehicles and weapons are being utilized and organized for use against the government forces still loyal to a free Afghan republic.

October 7, 2001 was the beginning of the war in Afghanistan. During its course, 3592 NATO Soldiers, Marines, Sailors, and Airmen would be killed as a result of nearly 20 years of blood, sweat and tears. In addition, Afghanistan lost over 66,000 of its own security force members in its struggle. Over 440 aid workers and another 72 journalists were killed in the work to rebuild the nation.

Some stated their exasperation and distrust at the government, including NATO, that sent them into a mission they could never traditionally win. Fighting an enemy that is not what they trained to combat, hiding in forests and caves instead of forming battalions and coming to the field, is not what much of the West was prepared for. Many, including French, Danish, German, Italian, Hungarian, and other European military detachments, have put in too much for NATO to remove themselves from the equation.
Members of the NATO mission have stated that the majority of their operations provided security, but also a cash flow for many of the populace. The infiltration of the army and other security services by the Taliban rendered much of the trustworthiness to nil.

Now, thousands of Taliban fighters are flowing into the capital as the US and NATO leadership has seemingly decided that the mission is untenable. The United States leadership has orchestrated a less than ideal pullout of forces, removal of support for the Afghan Defense Forces, and abandonment of social support services. The $700 million US embassy is standing by to be overrun as the employees are evacuated and the American flag is taken down. Schools and clinics across the country are being shut down, government services are being eliminated, and the Taliban is restoring the abusive government regime from before the 2001 invasion.

For the Georgian soldiers that served in the contested terrain of Afghanistan, many seem either disappointed or frustrated by the waste of manpower and resources spent in an attempt to save the beleaguered nation. 32 Georgian service members gave their lives for this mission. Another 435 were wounded in the operations Georgia undertook on behalf of NATO and in defense of the Afghan people. And, as the last 3500 American troops are removed, the United States is realizing that the collapse will bite harder than expected. Already, another 3000 United States Marines are being mobilized for deployment to protect high priority individuals, particularly the staff of the embassy. Georgian air transports are already operating to evacuate its citizens and related employees from the nation.

China and Russia have already expressed interests in the collapsing country. China is in talks with Taliban members about collaboration, giving the communist nation further dominance over Central Asia. In fact, only three nations have not pulled their diplomatic corps from the embassies in Kabul: Russia, China, and Pakistan. This should tell any observing official all they need to know about the intentions of these criminal regimes.

These strategic competitors to the West are enthralled at the removal of the beacon of democracy and liberty from their backyard. The new installation of a terrorist government, backed and befriended by enemies of the West, will only spell misfortune for those seeking to live free, as well as for the future of Western ideals. Chinese, Russian, and other oppressive governments will now have free reign and freedom of movement with the removal of a NATO presence in Central Asia.