Lithuania’s Foreign Minister: I Call on all Political Forces in Georgia to Focus on Reforms 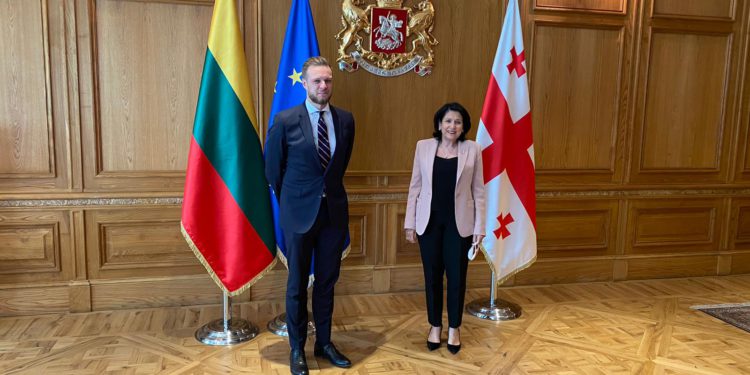 Source of photo: Embassy of Lithuania to Georgia

The Minister of Foreign Affairs of Lithuania Gabrielius Landsbergis continues his official visit to Georgia, holding meetings with the President of Georgia Salome Zurabishvili, the Prime Minister Irakli Garibashvili, Speaker of the Parliament Kakhaber Kutchava, and the Vice Prime Minister and Minister of Foreign Affairs David Zalkaliani. Embassy of Lithuania to Georgia spreads information about the meetings. The minister arrived in Georgia on April 27.

Landsbergis and the Georgian leaders discussed the ongoing reforms in the country, preparations for the next Eastern Partnership summit scheduled for autumn, topical issues of bilateral relations, the security situation in the region, and emphasized Russia’s destructive role.

Lithuania’s Foreign Minister drew attention to the agreement reached between the Government and the opposition that provided for significant justice and election reforms. The deal was proposed by President Michel after weeks of mediation.

“The agreement reached on 19 April will ensure the stability necessary to achieve ambitious goals. Therefore, I call on the country’s political forces to come to a compromise and to effectively implement what has been agreed,” he said.

He also voiced Lithuania’s support for Georgia’s aspirations for NATO and EU membership and stressed the need to continue the reforms necessary for the integration process. Landsbergis noted that Lithuania would continue its versatile support for Georgia in implementing the reforms provided for in the Association Agreement with the EU, especially in the areas related to the EU Green Deal and the country’s resilience. Officials of both countries agreed to cooperate more closely to prepare for the next Eastern Partnership summit and to set ambitious EaP goals. In this context, Landsbergis stressed that it was important for Georgia to coordinate with other associated partners – Ukraine and Moldova.

When speaking about challenges to the South Caucasus regional security, the head of Lithuania’s diplomacy and Georgian officials stressed that the greatest threat was posed by the aggressive posture that Russia had taken and the continuing occupation of Georgia’s territory. Landsbergis also promised continued support for Georgia’s sovereignty and territorial integrity, and to actively raise this issue in the international arena.