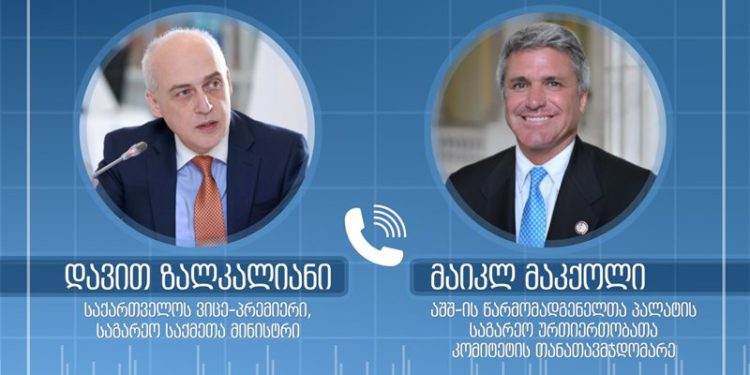 Discussing Russia’s ongoing military aggression in Ukraine and the situation in the region, the sides highlighted Georgia’s and the United States’ support for Ukraine, and the congressman welcomed the steps taken by Georgia in this direction. The sides reaffirmed their unwavering support for Ukraine’s sovereignty and territorial integrity and stressed the importance of the international community’s unity and resilience in the given situation.

They also discussed the difficult security and humanitarian situation on the ground as a result of Russia’s occupation of the Georgian regions in 2008 and the use of hybrid tactics. The Foreign Minister thanked Congressman McCaul and the U.S. Congress for their strong bipartisan support for Georgia’s sovereignty and territorial integrity, as well as for its Euro-Atlantic aspirations.

Minister Zalkaliani and Congressman McCaul stressed the significance of U.S. support over the past 30 years for the country’s democratic and economic development, defense and security, which is essentially important for Georgia’s European and Euro-Atlantic integration.