Yaakov Hagoel: “Big Leaders Dream and Go Against All Odds” 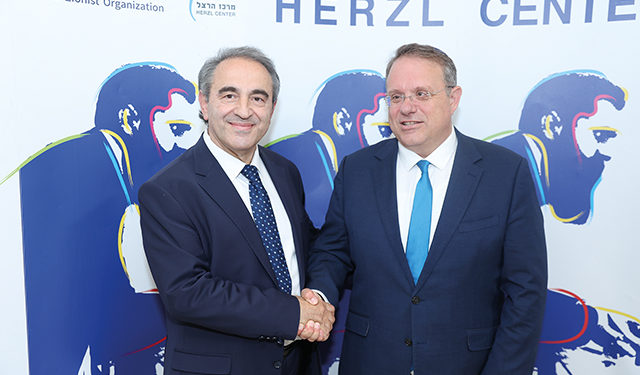 In Jerusalem, a solemn ceremony dedicated to the presentation of the book ‘Zionism Against All Odds’ began with the laying of flowers at the grave of Theodor Herzl, the founder of political Zionism.
The book was recently published in Hebrew and tells the story of Itsik Moshe, one of the creators of the Great Aliyah from the Soviet bloc, as the head of various organizations for the last 30 years. The Georgian version of the book will be published next year. It is also planned to translate it into English, as there is a great interest from World Jewry in the topics collected in the publication.

It is symbolic that the book presentation ceremony took place right next to Herzl’s tomb, where, traditionally, the protocol provides for world leaders to honor the name of the outstanding figure of the Jewish people.

As reported by the Israeli media, Israeli political and analytical sectors have unanimously recognized the special role of Itsik Moshe in historic events of modern-day Israel, such as the repatriation of hundreds of thousands of Jews from the Soviet Union, the establishment of Georgia-Israel-World Jewry relations and in public diplomacy in Israel, also known as Hasbara. The book is dedicated to these three topics.

Notably, the key part in the publication is played by the role of Georgia in launching the Great Aliyah or later the Hasbara International Campaign, which is led by Israeli House, an organization founded by Itsik Moshe in cooperation with members of the Knesset.

The presentation of the book was attended by members of the Government of Israel and the Knesset, including the Minister of Labor, Social Affairs and Social Services Itzik Shmuli, who told the guests that there are people whose actions have an impact on history, such as Itsik Moshe, who can dream and change systems with those dreams. It was also attended the Chairman of the Committee for Immigration, Absorption and Diaspora Affairs David Bitan, the former Vice Speaker of the Knesset Hilik Bar, leadership of Jewish Agency (Sochnut) and the World Zionist Organization, representatives of the political elite and society.

The event also received media attention. The Israeli press quotes Itsik Moshe as saying at the presentation: “A Jew must either live in Israel and defend his homeland with labor and blood; or if he lives outside of Israel, work for it forever. There should be no third way for a Jew.”

Moshe noted that this principle is also tailored to both Georgians and Georgian interests. He expressed concern that more could have been done in the last 30 years to establish Georgia’s ties with Israel and World Jewry, but that work could be strengthened now and that he was personally ready to contribute again.

At the presentation, Moshe presented a plan for 100 representations of the Israeli House, which should be opened not at the expense of the state of Israel, but with donations. The activities of the delegations will change Israel’s foreign policy towards Hasbara.

At the event, according to the members of the Israeli government and parliament’s warm speeches, as well as the head of the World Zionist Organization Yaakov Hagoel, the representations of the Israeli House are likely to be the basis of a future grand plan. Hagoel also spoke about Itsik Moshe’s 30-year service for Israel and noted:

“Itsik Moshe is made of the material from which the World Zionist leaders came: they knew the ultimate goals, they had the dream and the courage to go Against All Odds until the results are achieved. Such was Herzl, so is Itsik Moshe. I fully accept the concept of the Israeli House.”

Notably, the head of the World Zionist Organization Yaakov Hagoel called the UN Secretary-General to address the growing anti-Semitism in the world.

Itsik Moshe responded to the issue at the presentation and noted that at the initiative of the Israeli House, an agreement will soon be signed between the World Zionist Organization and the Georgian-American University of Georgia, based on which the university will be one of the first to teach anti-Semitism issues.

Moshe introduced the letter sent to Yaakov Hagoel, the head of the World Zionist Organization, by one of the heads of the Georgian-American University, Professor Zaza Rukhadze, stating that since anti-Semitism is a global problem, although this is not typical for Georgia, the university decided to be the first in the region and start teaching the history of anti-Semitism.

It was said at the presentation that thanks to the initiative of Itsik Moshe, the “Israeli Week” will be held in Georgia in July and a memorandum will be signed between the World Zionist Organization and the Georgian-American University within the framework of these events. The head of the Zionist organization will also meet with the leadership of three other universities in Tbilisi, where the history of the Holocaust will be taught with the support of Israeli House.

It is symbolic that on the second day of the presentation, Isaac (Bougie) Herzog, the head of the Jewish Agency (Sochnut), who wrote the foreword of the book, was elected as the President of Israel.

After the event, Itsik Moshe received an offer from European organizations to present the book and the Hasbara model developed by the Israeli House in Europe, as well as in other Israeli organizations and universities.