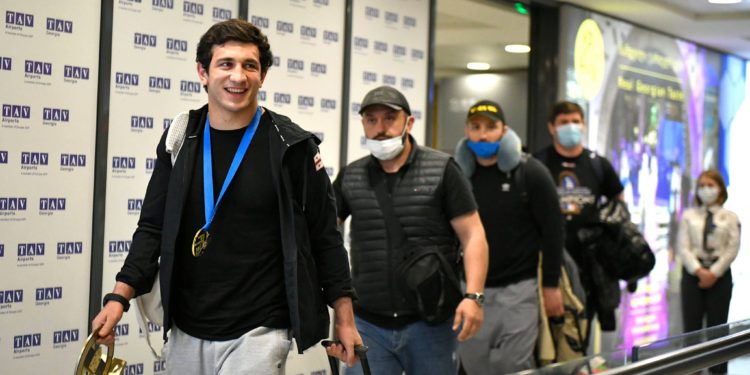 Today, on April 20, the Georgian judo team returned to Tbilisi from Lisbon with 5 medals and with the team in first place.

Soso Giorgadze, Deputy Minister of Culture, Sports and Youth Affairs of Georgia, and Irakli Dolaberidze, Head of the Sports Department, met the judokas returning from the European Championship at the airport and congratulated them on their victory.

At the European Judo Championship in Lisbon, the Georgian boys’ team won 1 gold, 3 silver, and 1 bronze medal and finished the championship with the first team place among the boys.

Vazha Margvelashvili (66 kg) brought the first medal to the Georgian team at the European Championship.

Lasha Bekauri defeated Beka Ghviniashvili in the Georgian final held in 90 kg and became the European champion for the first time.

In the 100kg category, three-time European Championship winner Varlam Liparteliani lost in the final and won a silver medal.

Guram Tushishvili, the world champion in +100 kg, defeated the Dutch Roy Meyer for the bronze medal and brought the team championship to the Georgian team.