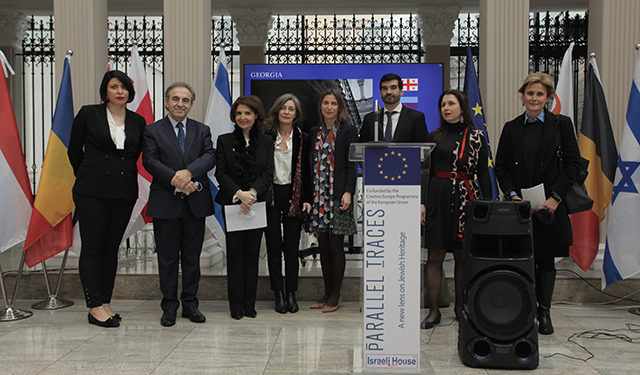 On March 11, an exhibition of a new project of the European Association for the Preservation and Promotion of Jewish Culture and Heritage (AEPJ) – Parallel Traces – opened in Tbilisi under the Creative Europe program.
The AEPJ is the official representative of the Jewish Cultural Heritage Route in Europe and it is certified by the Council of Europe.
The exhibition is organized by the Israeli House, which is the official representative of the Jewish Cultural Route in Georgia. The organization actively cooperates with the Ministry of Education, Science, Culture and Sports of Georgia and the AEPJ, under whose auspices this route is implemented.
The authors of the Parallel Traces project believe that awareness of the European Jewish heritage, an integral part of European history, can be raised through a variety of mechanisms. In particular, it includes creating photographic and audiovisual works and developing a new application. The original digital works of Jewish heritage are also important artistic materials that will be presented at the exhibitions.
It will be the result of transnational cultural and creative work.
The participating countries are: Belgium, Luxembourg, Spain, Serbia, Romania, Poland and Georgia.
The leadership of the European Association for the Protection and Promotion of Jewish Culture and Heritage (AEPJ) and guests from five European countries as well as representatives from four countries visited Tbilisi especially for this event. The event was attended by Head of Cooperation, the European Union to Georgia Sigrid Brettel, members of the Parliament of Georgia Elisso Bolkvadze, representatives of the Ministry of Education, Science, Culture and Sports. The opening of the exhibition was welcomed by David Bitan, a member of the Knesset, Chairman of the Committee on Immigration, Absorption and Diaspora Affairs via live broadcast.
The exhibition opened on March 11 at the Museum of Contemporary Art at # 27 Rustaveli Avenue and will last until April 11.
“The EU is proud to have supported this innovative exhibition, which brings together partners from Georgia and all over Europe and shows the power of culture to build bridges and connect people.
It is one of 31 Georgian cultural initiatives that have received a total of GEL 6 million in the last 5 years through the EU’s Creative Europe programme”. Said in her speech Sigrid Brettel, Head of Cooperation at EU Delegation in Georgia.
Itsik Moshe, head of the Israeli House and Chairman of the Israel-Georgia Chamber of Business, noted that it is important to take care of cultural heritage, and public organizations should play a special role in this.
“One of the main activities of our organizations in Georgia is the promotion of cultural and historical values, which is reflected not only in the organization of such events, but also in direct participation in the preservation of cultural heritage. This is especially relevant in countries and cities with a long history, such as Georgia and Tbilisi, which are distinguished by multiculturalism, including samples of Jewish cultural heritage. It is a cultural code that is the key to a particular culture. Israel-Georgia Chamber of Business has created a concept that envisages the development of such old neighborhoods while preserving traditional cultural elements. The elite facilities created in the city by member companies of the Chamber of Commerce, according to a fair assessment of specialists, organically merge with the tradition of the historic city. Therefore, with such activities, we continue to work actively with the Council of Europe, the Ministry of Culture and all the agencies that work to preserve / develop a unique cultural identity”, said Itsik Moshe.

Itsik Moshe is the leader of a group of friends at the Israel Prehistory Museum and is actively working on cultural heritage issues.
The exhibition was attended by Elisso Bolkvadze, Member of Parliament of Georgia, pianist and UNESCO Artist for Peace. She praised the activities of the Israeli House after the event, saying:
“It is symbolic that this exhibition is hosted by Georgia, a country with a rich culture and cultural heritage, as well as a great Jewish cultural heritage. Under the auspices of the Council of Europe, there is a Jewish cultural heritage route in Georgia, on the one hand, it contributes to careing for cultural values, on the other hand, thanks to this route, Georgia has long been in the center of tourists’ attention from Israel and world Jewry”.
Natalia Voutova, Head of Council of Europe Office in Georgia, stated online: “I would like to express my gratitude to the Israeli House for the invitation to participate in opening of the Parallel Traces exhibition. It is an important event for the council of Europe Office in Georgia because as you know the Council of Europe is about fighting discrimination and also about development of different cultures present in Europe the Jewish Culture being an important one”.
At the meeting, in his speech Victor Sorenssen, Director of the AEPJ, the European Association for the Preservation and Promotion of Jewish Culture and Heritage said: “Parallel Traces is a project that allows us, through the European Jewish heritage, to bring cultures, views, and celebrate our diversity, with a tool as revealing as audiovisual art”.
One of the leader partners of the Parallel Traces is CUMEDIAE from Belgium and its Artistic Director of the exhibition was Rosa Juanco.